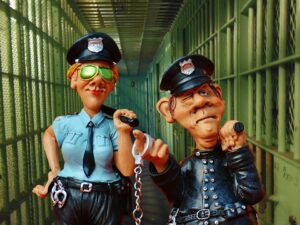 Once respected, the FBI has become a disgrace

At one point most of us trusted the nation’s pre-imminent law enforcement agency to be effective, honorable, and non-partisan. I remember watching the FBI Story, with Jimmy Stewart (he was in the movie, not watching with me). A good flick that holds up well.
No institution has ever been perfect, but Americans in general had confidence in the FBI. Even under the tutelage of a flawed and narcissistic J. Edgar Hoover, the agency was revered. (If people had known Hoover was dressing up in women’s clothes, as widely reported, it might have changed things years ago. Today, of course, it wouldn’t be a big deal. Cross-dressing? Who doesn’t?) The agency that was once thought to be above politics is now a hostage to it.

Look at January 6. No one who deserves to be taken seriously thinks the riot at the Capitol was anything but disgraceful. Yet, the agency is investigating it as part of its political agenda, showing energy and resources far beyond any they brought to bear on violence committed by leftists in the past year.

Working with its parent, the DOJ, the FBI has made about 500 arrests in relation to January 6. Some of these people are being held in solitary confinement, denied counsel, parole, or a hearing date. In testimony last week, Capitol Hill officers referred to the protestors as insurrectionists and treasonous. Yet not one person is charged with either of those things. Nice objective law enforcement, right?

Have you heard of a single person from BLM or ANTIFA being held in solitary? One? No. January 6 arrestees are treated more harshly, even as most face charges as trivial as trespassing and interrupting an official proceeding. In what universe is interrupting an official proceeding more problematic than, say, arson, assault, and murder, all of which were committed by BLM and ANTIFA last year?

One can imagine terrorists in a cave in Afghanistan hearing the news. “Damn, if we’d thought of that whole disrupting an official proceeding option we wouldn’t have had to fly jets into tall buildings.” Seriously? These are the worse offenses you can come up with in an alleged insurrection? What next? Penalties for wearing stripes with plaids?

As observed here, in a piece from Politifact – a supposed “fact-checking” organization that runs cover for the left – people from January 6 have been held in solitary confinement, denied access to legal counsel, parole, or even a trial date. Note the story is intended to show there is no political motivation behind these detentions and, in fact, shows just the opposite. About fifty people, apparently, are being singled out for the worst treatment.

The D. C. Department of Corrections, where these people are being held, will not answer questions about how many are in solitary, denied counsel, etc. Democratic and Republican legislators have criticized the unfair treatment of these citizens. See here. Face it: when Louis Gohmert, Elizabeth Warren, and the ACLU agree the feds are out of control, we’ve got a problem (and good on Liz for saying so). A government that won’t even tell you how many people it has imprisoned is, by definition, fascist and corrupt.

On a final point related to January 6, note the completely different ways the justice system, media, anti-Trumpers, and leftists (but I repeat myself) react to the killing of any black person and the killing of Ashley Babbitt. She was a conservative, Trump-supporting person, a U. S. veteran, with no criminal record, unarmed, and threatening no one. She was shot, point blank, in the neck and bled to death on the Capitol floor. No one has even released the name of the officer who shot her.

Meanwhile, George Floyd was a career criminal, drug user, who was high at the time, and physically resisted arrest. The officer who shot him is known world wide. He is in prison for the crime. As he should be. But if there aren’t two separate systems of justice for conservatives and leftists, one has to ask: why is it considered an outrage when Floyd was killed but barely merits a mention when Babbitt was?

Again, the point isn’t that Floyd should have died; he should not. But if his death was a scandal, so is Babbitt’s.

Imagine if a Trump Administration had held rioters from 2020 without bail. If you don’t yet see the double standards, you aren’t watching.

If J. Edgar Hoover were alive today, he’d hang up his teddy, put away his high heels, and put on a business suit long enough to scold us all. The fact is that we no longer have to live in fear that law enforcement will become blatantly political… because it already has. Our concern, and fear, at this time should involve questions of what can we do about it?

In the meantime, examples of the corruption and bias of our federal legal system abound. More to come.