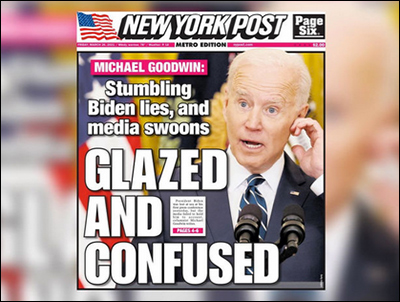 First, consider the events of June 6. The anniversary of D-Day. This is a good time to remember – it can be argued it was the most important military action in world history – the events that began to turn the tables in WW II.
[DISPLAY_ULTIMATE_SOCIAL_ICONS]

The allied invasion of France began the effort to retake land occupied by German forces. We remember, justifiably, the tremendous bravery, skill, and sacrifice of the thousands who were killed, injured, and fought bravely. Those men were the best of us. They earned our eternal respect and gratitude.

Traditionally, presidents pay homage to these men. Joe Biden couldn’t be bothered to even mention it. But he did take the anniversary of D-Day to talk about the Tulsa massacre. A hundred years ago, black residents were massacred. It was not just some random group. The killings were carried out by members of the KKK (a group founded by Democrats as the de facto terrorist arm of their party).

This was a horrible incident; something we should teach our children and make sure it never fades from memory. There should be no debate on that. But: why was it the most important message that day, without also at least honoring D-Day? How does that make sense?

A good general rule is this: if you want to know what people care about, what they value, look at how they spend their time and money. The truth will come through. The sacrifice of U. S. veterans, and the triumph of freedom, is not a major concern for Biden. There is no other reasonable conclusion you can draw.

If you need further evidence, consider this. Biden made a point to issue a message, April 21, to Muslims, celebrating the beginning of Ramadan. When Biden doesn’t make a statement on something it is because they made a decision not to.

Donald Trump never let a D-Day anniversary pass without comment. Maybe he had better advisors. Most definitely, he cared more. Does Biden?

There is evidence that fraud, illegality, error, or unconstitutional actions were present place in 2020. That is not debatable. Just this week, for example, a judge approved a request to look into absentee ballots in Fulton County. Officials, Democrats, and anti-Trump forces have fought for six months to prevent this.

Common sense would suggest that, if there were questions about the legality of ballots, one of the first things you would do is allow them to be examined. Just the opposite happened. The same people who protested that there was no evidence of fraud fought like a Viking shield maiden to prevent anyone from looking for it.

Consider me naïve, but if I am innocent, I don’t fear investigations. The Democratic leadership, and anti-Trumpers, have acted like a husband who has been accused of cheating on his wife. They say “No, of course I am not having an affair and, no, you can’t look at my phone log, texts, or credit card receipts.”

We don’t know how much evidence would hold up under examination, if it proves intentional malfeasance, or how much of a difference it made. But we would like to know.

It is also inarguable that it doesn’t require a huge, national, detailed conspiracy to steal an election. It can be accomplished through the actions of just a handful of officials, in a few important urban counties, in key states. So, when you hear the admonition that there wasn’t widespread fraud, it is telling. No one is claiming it was widespread, but the continued reliance on the use of that adjective, by Democrats and anti-Trumpers, is an admission fraud did occur. To continue the analogy, this is like the accused husband defending himself by saying “No, I haven’t had a lot of affairs.” Guys, try using this at home and let me know how it works out for you.

Both parties should support a full, factual, and fair examination of the evidence in a public forum. No one has a valid reason to oppose this. In fact, the only ones who might be against learning the truth are those who support cheating. That simple. If it turns out Biden cheated, we should know. If it turns out Biden won fairly, let the chips fall where they may. If we know with certainty what went wrong in 2020, we can take actions to ensure anything improper does not happen again. Otherwise, the chaos and mistrust that attended 2020 will be repeated in years to come, and Americans will justifiably lose all confidence in our elections, and our republic will not survive. Does Biden care?

Yet Democrats/anti-Trumpers fight, molar and talon, against even investigating these questions. Very few courts even heard evidence. The assertion that the evidence was heard and rejected is simply untrue. One court that did hear evidence, in Wisconsin, pointedly said they chose not to interfere, not because there was a paucity of evidence, but because it would be too disruptive.

Which takes us to Georgia. Read more about what has been ordered in Fulton County, See here. It looks like we will have an examination of some 140,000 absentee ballots in the county that turned the state for Biden.

This was, as you will recall, one of four major counties where the vote count was suddenly, at the same time, halted, and bipartisan poll watchers sent home. Then, illegally, new votes were mysteriously uncovered and counted. Almost all of those votes were for Biden. Many of them were on paper ballots that had not been folded, as they must be to be when mailed in. Many ballots had votes for Biden but for no other offices. Many had circles filled in with the exact same shape, as if they had been copied, rather than filled out by hand. And many seemed to be on a different kind of paper than ballots. In a nutshell, there is plenty of reason to be suspicious.

At this point, it is not possible that Trump will somehow be inserted back into office. If anyone is telling you that, they are misleading you. It doesn’t work that way. (A number of reporters are claiming Trump is telling people he will be “reinstated.” (That is possible – it is also possible a capybara will come strolling through your family room, but I wouldn’t count on it.) The media have reported many things, over the past six years, about Trump that turned out to be false. If he is actually saying such things, which is highly debatable, he is also mistaken.

There is no legal provision that allows a defeated incumbent to be put back in office when and if it is proven the person certified as the winner cheated. In extraordinary cases, some courts have ordered new elections at the state and local levels. But it has never happened with the presidency, and it isn’t going to. The current SCOTUS didn’t even have the spine to take a case that would have clarified whether Pennsylvania acted constitutionally when they changed election laws outside of the appropriate legislative actions. So, they aren’t going to send Joe packing. On the plus side, it isn’t entirely clear whether Joe would even realize it if he were.

But this much is certain: there is good reason to question the fairness and integrity of the American electoral system. In the future, we should do everything we can to make sure it is easy to vote but hard to cheat. No party or elected official should oppose that.