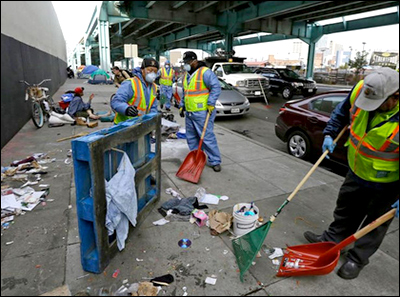 [San Francisco] has more billionaires per capita than anywhere else in the world, but it also has a homeless problem so severe that it rivals some third-world nations. On any given day you can see souped-up Lamborghinis and blinged-out trophy wives in one part of the city, then walk over a few blocks and see piles of human feces, puddles of urine and vomit caked on the sidewalks. The misery of homelessness, mental illness and drug addiction hits deep in San Francisco and has turned parts of a beautiful city into a public toilet.

Yeah, okay, the questions are rhetorical. San Francisco, Los Angeles, Portland, and Seattle are suffering from progressivism, first and foremost.

The MSM are calling homelessness in these cities, crises. They sure are, but they’re manufactured. The homeless are rampant in these cities because years ago progressives chose to grant the homeless rights. Most homeless are mentally and emotionally troubled and/or suffer from drug and/or alcohol addictions. They deserve treatment and care off big city streets. And no one – including Mister Bojangles – has a right to squat on public property and thoroughfares, anyway.

The solutions are to recognize how troubled and incompetent the overwhelming number of homeless are. It’s time to rewrite laws. It’s high time to move away from the open-ended “civil liberties” approach to dealing with the homeless. The homeless need to be moved into treatment centers. The worse need to be institutionalized – for their own good and society’s.

Society – it’s not an afterthought. Family, community, society… the latter builds on the first two. Without a healthy, vibrant, and full-functioning society a nation isn’t far from ancient Rome after the fall. That’s not hyperbole. That’s history.