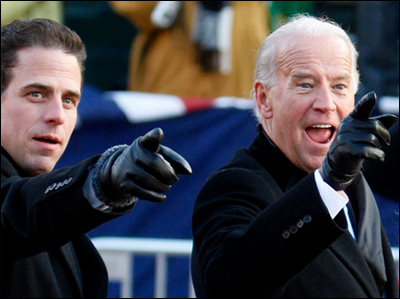 What are we learning about the Obama years in DC? How very corrupt Obama’s administration was. How corrupted critical federal agency leadership was – James Comey and John Brennan ring bells? The Russia collusion fraud was coordinated out of Obama’s Department of Justice.

That’s power corruption. Then there’s money corruption. Democrats are in a lather because President Trump and Rudy Giuliani want Hunter Biden investigated. Joe, too, because there’s a strong connection between Hunter getting rich off his Ukraine dealings and his old man running interference for him. Or using the power of the vice presidency to keep Hunter out of legal hot water in the Ukraine.

Joe Biden, now the Democratic presidential frontrunner for 2020, faced scrutiny for months over accusations that he pressured Ukraine to fire its top prosecutor, who at that time was leading a corruption investigation into a natural gas company that had ties to Biden’s son.

From the Politico report:

Biden’s image as a straight-shooting man of the people, however, is clouded by the careers of his son and brother, who have lengthy track records of making, or seeking, deals that cash in on his name. There’s no evidence that Joe Biden used his power inappropriately or took action to benefit his relatives with respect to these ventures. Interviews, court records, government filings and news reports, however, reveal that some members of the Biden family have consistently mixed business and politics over nearly half a century, moving from one business to the next as Joe’s stature in Washington grew.

We’re to believe that over the many years that Biden’s brother and sons have cashed in on Biden’s name and power positions that Joe was oblivious? The Ukraine affair appears to undermine that contention.

Trump and Giuliani are absolutely right to want the burgeoning Ukrainian scandal investigated. Biden is on record – video! – bragging about how he had a Ukrainian prosecutor fired who was indirectly investigating Hunter’s dealings there. Biden threatened to withhold U.S. financial aid if his demand wasn’t met.

Slimy? You bet. Worthy of criminal investigation – here and in the Ukraine. Undoubtedly. Will it happen? What we’ve learned in the wake of the Obama years is that the powerful in DC protect their own. See any Russia collusion indictments lately?