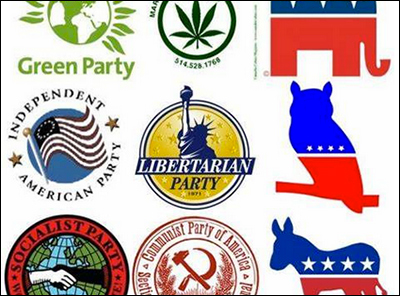 When people observe the hot mess that is our national political discourse today, partisanship is often blamed, and with some justification. However, partisanship can be constructive when it reflects sincere values. If you’re a Republican or Democrat because Uncle Ed was, or the hot girl you hit on at the bar was, or you thought Obama was cooler than John McCain (duh), well, that doesn’t suggest you’re bringing a lot of intellectual firepower to the battlefield.

If partisanship reflects an understanding of the differences between the parties, and a conscious embrace or rejection of one or the other, now you’ve got something.

Many don’t have a clue what the national leadership or major candidates in “their” party really believe. But there are foundational values for today’s parties, and they are hugely important.

Today, one party endorses faithful adherence to the Constitution, freedom of speech, even on social media platforms, defense of the second amendment, secure borders, choice of private plans for health insurance, lower taxes, and reducing regulations, to pick a few points of distinction. Anyone who does not understand the existential threats relative to each of those areas, again, isn’t paying close attention.

Partisanship implies conflict, and for good reason. Our constitutional republic was not designed to minimize friction between political factions. Many people dislike conflict, and avoid arguments, by just letting others get away with untrue or unconstructive comments. When you take a stand, you become a target. Many on the Left make a habit of trying to stifle debate by savaging the messenger, sometimes even someone on their own side. Nancy Pelosi, Donald Trump, and my cocker spaniel, Buddy, have all been called racists in recent days.

It is curious how often your average voter (or occasional voter, or non-voter) waxes philosophically, expresses regret, and sheds copious amounts of crocodile tears over how darned mean everyone is. Golly and gee whiz, folks, as Rodney King said, can’t we all just get along?

But the future of our great nation, and of the people we love, is not going to be improved based on how many group hugs we share or whether we sing a rousing chorus of Up With People. The stakes are very high. Actions have consequences. Our lives, health, and freedom depend on what happens in our elections and the government that is managed by the winners. With the exception of faith, which is related, what could be more important?

The political debate in this country is not insignificant. The stakes are not minimal. There are serious ramifications to decisions being litigated in our political discourse. Things like whether terrorist nations get nuclear weapons; whether we search in vain for electric airliners, wind-up air-conditioners, and bicycle-powered MRI machines to replace a system that depends on the abundant fossil fuels at our disposal; or whether the 180 million people with private health insurance get to keep it, or turn their medical care over to the same people who run the DMV, the Social Security help line, and the toll booths on the Tappan Zee bridge.

Our partisan divisions are both ideological and geographical. While there are conservatives in Malibu, and socialists in Tulsa, one can offer geographical generalizations, and there is a lot of truth to them.

Victor Davis Hanson (who knows more before breakfast than you and I do all day), writing in National Review, observes that half of the country, including the core of the Democratic Socialists, are concentrated in only 146 of our more than 3,000 counties. They live primarily in the urban areas of the coasts (with Chicago and Illinois being an aberration, kind of like a mustache on the Mona Lisa). That is about 10 percent of our territory. People who believe that “average Americans,” in the heartland, have different values are largely correct. The more conservative half of the country, again generalizing, resides in middle America, comprising nearly 90% of our real estate.

A “moderate” in the Democratic presidential primary field is someone who does not want to ban all private health insurance, thinks we should use fossil fuels for at least a few more years, or thinks doctors should provide life-saving care for babies that survive botched abortions. That person is also due to be savaged by his or her competitors as not being progressive, liberal, or socialist enough. Anyone who says there aren’t any differences in the political parties, like those who say all religions are the same (a possible topic for a future post), are either uninformed or delusional. Pick one.

It is less the label that matters than the policies the parties promote. The Democratic Socialist agenda would be just as threatening to freedom, prosperity, and security if it were advocated by the Alliance of Unionists and Druids (Reformed) rather than by Democrats.

Partisanship, in its broadest possible terms, will continue unabated until there is a substantial, and unlikely, change in the philosophies of the two major parties. In politics, as in most of life, we face imperfect choices. Neither party is completely admirable. And count me among those who wish we had better choices. But to say that neither Party is perfect is not to say that they are equal. They are not. Conservative Democrats, at the national level, are today like the Tooth Fairy, Loch Ness Monster, trolls, and werewolves: completely mythical creatures.

The political discourse today isn’t for the timid. You’ve heard the axioms: politics is a blood sport. If you want a friend in Washington, buy a dog. We suggest you turn Grandma’s picture to the wall and apologize in advance to your pastor, because things are going to get ugly.