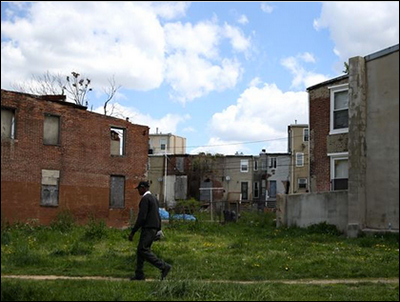 The only way you’d believe that big cities are urban paradises is if you live inside your head or mail order pot out of Colorado. Or you’re a Democrat with everything to lose when voters really stop to examine the failures that are Democrat-run cities. Failed because of bad policies, incompetence, and corruption – decades worth. Failed as in disasters for the poor, who happen to be disproportionately “people of color.”

Baltimore is no urban playground, as the recently trending “Baltimore Pride” Twitter hashtag suggested. Many of Baltimore’s precincts are full of mean streets, wrecked lives, and generational poverty. Drugs kill. Schools there that warehouse kids should win blue ribbons. Why? Because truancy rates are sky-high. Illiteracy is a norm. Crime is rampant.

These cities aren’t all that dangerous? Then stroll through any of them late at night. Good luck.

When President Trump fired broadsides at U.S. Rep. Elijah Cummings over conditions in Baltimore, Cummings went nuts. Trump was branded a racist – for telling the truth. Democrats and the MSM followed suit, championing Baltimore as a wonderland out of Oz. And circled wagons around Cummings, as if he were a dashboard Jesus.

Cummings is no such thing, of course. He’s represented one of Baltimore’s – err, grittier – areas for over a generation. He’s grown wealthy in public office while his constituents languish in poverty. They’re menaced by crime, 24/7.

Almost 40 years ago, George Gilder wrote a book, “Wealth and Poverty.” It was a seminal study. Much of it focused on the collapse of communities and families in urban black America, particularly. The sad truth is Gilder’s study is no less relevant today than it was then. In fact, situations are worse. The trends that began in the early 1960s are deeply entrenched. Working- and middle-class whites long fled cities. But so have many working- and middle-class blacks. Hispanics are getting out when they can.

Affluent folk live in U.S. cities, like Manhattan borough? But with conditions. Increasingly, like Rio de Janeiro, where better incomes populate gated communities and secure apartments. You won’t see denizens’ Gucci-shod feet walking streets in or near favelas, which abound.

Liberalism and big city Democrat machine politics are a toxic combination. Millions of lives have been shattered. The damage is irreparable. That’s gone on too long. Want better cities? Then dump Democrats.