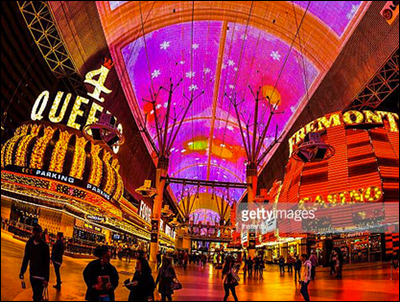 It shouldn’t come as a surprise to anyone that politicians will do almost anything to get elected. If that astonishes you, I would refer you to other recent news: water is wet, fish swim, and birds fly.

If hypocrisy were money, the political class could retire, en masse, move to desert islands, leave the rest of us alone, and let Buck, your yard guy, run the country. If he cares as much about us as he does about the palm trees, he’s my guy.

I admire the sentiment. As a comparison relevant to my current abode, I’d prefer to hang out in front of the Four Queens on Fremont Street, and choose the first 535 people who pass by to run our national legislative branch, than to have the gang of elites and wimps who currently reside on Capitol Hill. Folks here, here, and here look pretty good about now. Pelosi or the guy in the pirate outfit? I hope he has an “arrrrrrr” by his name!

I remember also the weirdly funny movie (not everyone’s cup of tea) from two decades ago, called Mars Attacks. In one scene, a Martian is preparing to address Congress and, instead, vaporizes them with a ray gun. With one spray of the room, he retires more incumbents than the voters have been able to do in a dozen elections. In the film, a woman watching the event on television shrieks more from delight than horror.

It almost had to be an improvement.

It is said that, to clean it up slightly, it is not reasonable to expect Congress to be chicken salad when we keep electing chicken excrement.

Yet, don’t we still get to be disgusted when the bar is continually lowered? When politicians who are already decadent continue to surprise us with their decadence, shouldn’t we continue to be offended? If you marry an ex-con, you’d still get to be mad if he stole money from your purse.

How low do we have to sink? Certainly, this sentiment is shared by many who find President Trump’s language offensive and conduct indefensible. And count me among those who wish he would be a bit more selective in his tweets, and more judicious in his statements.

But at a time when the country is improving in nearly every measurable way, Trump’s faults notwithstanding, we are also shocked by the selective application of our outrage. Why is it that every time President Trump says something that could be interpreted as false, or as racist, it sets off righteous indignation among the Democrats, mass media (but I repeat myself), and anti-Trumpers? Meanwhile, the “other side” is continually forgiven or ignored.

Hillary Clinton, aka “the Hildebeast” (which is a nickname I invented, to the best of my knowledge), said, at a public event, that people confuse Eric Holder and Corey Booker because they “All look alike.” That is a more offensive, and patently racist, statement than Donald Trump has ever made. Yet, more people show up to a Bill DeBlasio rally than have expressed outrage over the statement. She gets away with overtly racist statements, as does Creepy Joe Biden. It is not news there is a double standard in how Democrats and Republicans are viewed, especially by the media. But it is nonetheless outrageous.

Which brings us to Elizabeth Warren and Kamala Harris.

This week saw the fifth anniversary of the Ferguson, Mo., shooting of Michael Brown. A full investigation by the Obama DOJ concluded that it was a justified police shooting. And a grand jury did not return an indictment. An African-American president and attorney general, together, looked at the facts and found there was no evidence Brown was murdered while trying to surrender. Any police shooting is a tragedy, but it matters whether it involved a man peacefully trying to surrender or one who, it turns out, had threatened and attacked the officer and was a perceived threat.

Warren and Harris both tweeted that Michael Brown had been murdered. If Warren’s words, and those of Harris, do not both qualify as bold-faced lies, and attempts to stoke racial division, then the concepts have no meaning. Their disregard for the truth, and their willingness to use a tragedy to generate votes and contributions, should be rejected by any decent person. Yet, most on the left, and virtually all the media, are silent.

People have an inherent sense of what is fair, and of what matters. Thus, millions of us could still support a President Clinton, even though he was irrefutably guilty of perjury, sexual harassment, and lying skillfully to the American people. Voters tend to view ethical inadequacies through a lens of what is consistent, fair, and important. Everyone who goes to the polls in 2020 will do so with a clear understanding of the complaints about the President. They get it; hog, dog, and frog. The hypocrisy and selective application of standards, principles, and decency is doing more to solidify the strength of Trump’s base than anything he could do himself.