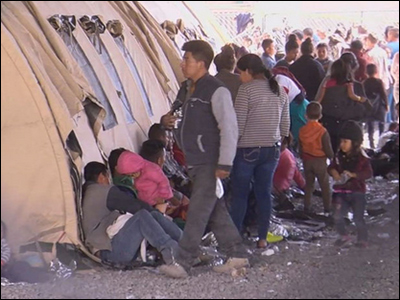 President Trump is battling again to get lasting control of the nation’s porous borders. Democrats and advocates for migrants (aka, illegals) are gearing up to fight the president’s rule change in court. Doing so, Democrats are playing into the president’s hands in advance of the 2020 elections. As it is, 2020 will offer voters a sharp contrast: Open border Democrats versus border control Republicans.

Common sense dictates that a nation controls its borders. Otherwise, a country as prosperous as, oh, say, the U.S. will be flooded with poor illegals. The Pew Research Center estimates that there are 10.5 million unauthorized immigrants (aka, illegals) in the country. That’s a quarter of the U.S. foreign born population.

To put the illegals population in perspective, 43 states have fewer than 10.5 million legal residents.

The president has had success in stemming the flow of illegals into the U.S. this year. Per the Washington Post report:

Border apprehensions have slumped more than 40 percent since May, a major drop officials have attributed to increased enforcement in Mexico, but officials worry about a resurgence in the fall.

Despite the propaganda, illegals impose higher costs and hardships on communities. Emergency rooms are flooded, schools are overcrowded, crime rises, and diseases increase.

Is the president right to fight for this rule change? Will he win? Will Democrats pay a price for opposing President Trump in 2020? Weigh in!