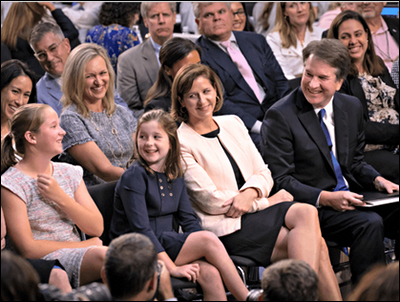 The New York Times suddenly made a major revision to a supposed bombshell piece late Sunday concerning a resurfaced allegation of sexual assault by Supreme Court Justice Brett Kavanaugh — hours after virtually all 2020 Democratic presidential candidates had cited the original article as a reason to impeach Kavanaugh.

The update included the significant detail that several friends of the alleged victim said she did not recall the purported sexual assault in question at all. The Times also stated for the first time that the alleged victim refused to be interviewed, and has made no comment about the episode.

The New York Times is back hurling trash at Justice Brett Kavanaugh. The Times aim is to destroy Kavanaugh’s effectiveness as a justice. The Kavanaugh appointment tilted the Supreme Court toward a conservative judicial perspective. That’s pure poison for Democrats and the left.

The renewed attack on Kavanaugh is a signal to Trump and Republicans: No more conservative SCOTUS nominees. It’s also an attempt to discourage conservative jurists from wanting to be nominated.

If Democrats can’t stop Trump’s nominees’ appointments, they’ll conduct scurrilous campaigns to destroy them on the bench. Notice the chorus of Democrat presidential contenders who called for Kavanaugh’s impeachment in the wake of the Times recycling a false allegation. Coincidence or coordinated?

Democrats and the left are obsessed about controlling the federal courts. SCOTUS is the crown jewel. They desperately need federal benches occupied by “progressive” jurists. Trump has made an historic number – 150 – appointees to federal benches. This is a clear threat to Democrats pushing leftist measures. These measures might not fly legislatively but can be enacted indirectly through judicial fiat.

The Times regurgitating malicious fiction about Kavanaugh goes beyond politics as blood sport. Attempting to destroy a good man to further political aims is evil.

The Times, along with other prominent “news” outlets, is acting as a propagandist. These outlets aren’t official organs of the Democratic Party. They don’t need to be. They believe their independence lends cover. But the ruse has been failing for years. The MSM’s credibility with the public has plummeted to historic lows.

Brett Kavanaugh was – and is again – a man wrongly accused. Christine Blasey Ford’s explosive charge was gobbledygook. Ford’s claim was based on vague recollections without corroboration. There was zero evidence to support anything Ford said. Either Ford is a troubled woman who concocted a fiction or she lied to advance the Democrats’ and left’s objectives.

The Times dredged up allegation by Debra Ramirez is no better than Ford’s. Ramirez was a fellow Yale law student of Kavanaugh’s. Her hazy recollections are also without foundation.

Brett Kavanaugh has lived an exemplary life. Dozens of people have attested to his outstanding character, honesty, decency, and kindness. What’s being done to this good man should repulse and anger Americans of all stripes.

Democrats and the left are waging a cold war on traditional America. It’s heating up with each passing day. It’s all about power acquisition. Clearly, Democrats have lost sight of boundaries. To get power, they aren’t hesitating to destroy virtuous people – and, if necessary, important institutions. After all, the ends justify the means.