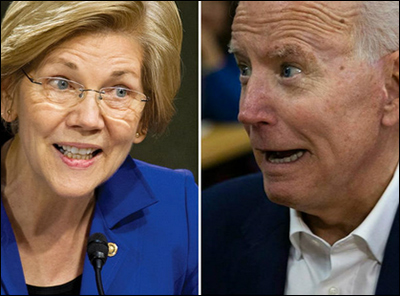 Joe Biden’s strongest selling point — that he’s the most likely to beat Donald Trump — is losing some of its edge, as Elizabeth Warren vaults into second place because a growing number of Democrats think she can win the general election.

Bloomberg reports that more Democrats are seeing Liz Warren as a comer. She can beat Trump in 2020, they believe. Seems there’s no population limit in the Democrats’ Jonestown. They’ve got a factory churning out the Kool-Aid, folks!

Not that addled ol’ Cheatin’ Joe Biden can beat Trump. The always gaffe prone Joe shoots himself in the foot so much we’re surprised he can walk. “Hands” Biden has ethical baggage, too. He’s alleged to have played fixer for his son, Hunter, with the Ukraine. And something stinks about all that dough his kid raked in from Xi and the Chinese.

But Liz Warren? Liz brazenly lied her way into law school claiming she was part American Indian. She used the Indian scam to gain nice paying gigs. Not to mention that Liz is about as far left as Bernie Sanders. She’s also routinely angrier than a Sioux warrior in hot pursuit of Custer. Her sort of anger doesn’t play well among independent voters. Independents decide presidential year contests.

But what do you think? Would Liz be a better choice than Joe to challenge Trump next year?