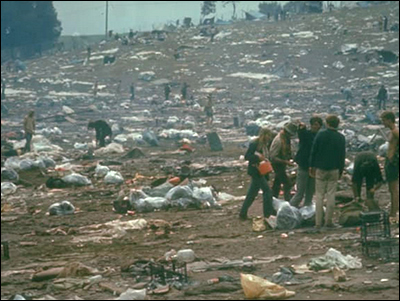 Advertised as three days of “peace and music,” the fair in this Catskill community has turned into a massive traffic jam in a giant mud puddle that has resulted in the death of one youth and the hospitalization of scores of others, many of them suffering adverse drug reactions.

The 1969 Woodstock Music and Art Fair was billed as three days of “love, peace, and music” or some-such. A half-century of myth-making has fueled that illusion. Myths are mostly built on what people want to believe versus hard reality.

Woodstock happened in the mud among piles of garbage. Toilets were scare. Who bathed? Who could? Facilities were lacking. Drugs may have been more gettable than drinking water. Booze there was. Sex was aplenty – but so, consequently, were STDs. Who knows how many about-to-be 50-year-olds were conceived at Woodstock?

The festival didn’t resemble the Garden of Eden… flower-children gloriously romping in grassy meadows while singing about love and harmony. Woodstock was a display of humanity in many of its excesses. It was closer to the second and third circles of hell in Dante’s Inferno.

But there was the music. Those coming of age at the time have that to fondly recall. Richie Havens, Joan Baez, Joplin, The Who, Ten Years After, Hendrix, among many other notables. But the music is sweeter from afar than it was there. Myths are like that.

What do you think about Woodstock? Weigh in!