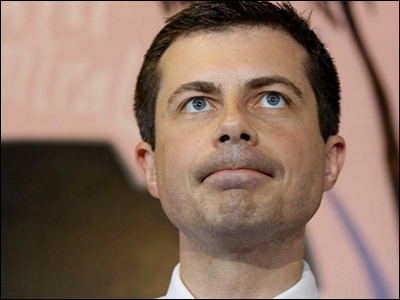 “We have to actually unify the country around this project. And that means bringing people to the table who haven’t felt that they’ve been part of the process. I mean, this is the hardest thing we will have done certainly in my lifetime,” he said. “This is on par with winning World War II, perhaps even more challenging than that.”

What Buttigieg and an array of interests are peddling is the fiction that human actions are devastating global climate.

“Manmade” climate change is an all-purpose cause.

Plenty of pols and leftists are using manmade climate change to obtain power and money. Then there are people who lost their religion – if they ever had it. They’re zealots in the Church of Climate. It’s very neo-pagan.

Never mind that the forces of nature are vast beyond human comprehension. Humans aren’t anything more than ants at nature’s picnic. What Buttigieg and his ilk have going for them, though, is outsized conceit. God is dead and man is God. We can’t accurately predict if it’ll rain tomorrow, but humanity’s powers are godlike. Why, we can destroy a planet.

The garrulous Alexandria Ocasio-Cortez informs us that the world will end in 12 years. “Repent,” she practically shouts, “Mend your evil ways! Gut the economy. Revert to primitive lifestyles. Knuckle under to Big Brother! Save the planet!”

Not to be outdone, Beto O’Rourke claims we’re toast in 10 years. The imperative: Make radical changes to society now. Or we’re all goners.

This lunacy would have been ridiculed and laughed off the national stage not long ago. Beto and AOC would have been packed into clown cars for rides home. But they persist and are listened to. It’s telling about society’s descent into adolescent fantasy. Where have all the adults gone?

Earth climates change – over time scales typically involving thousands and millions of years. The causes are many and complex. They’re all natural. Humans are incidental to the process – and weren’t around for most earth history, as is.

But facts and reality won’t stop those who are power and money hungry. True believers and end timers aren’t going to be disabused of their nutty perspectives. A climate Tower of Babel will be built!

What do the adults and the sane have to do to counter this absurdity? Speak the truth openly. Oppose the climate radicals dangerous and destructive schemes. Let’s not let them end our society in 10 years.