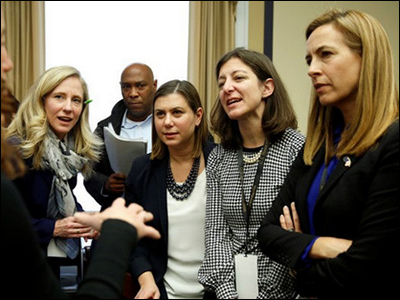 The mainstream media call them “moderate” or “centrist” Democrats. Nowadays, that means they’re a tad less left wing than other Democrats. These centrists represent districts that Donald Trump won in 2016. There are 31 in all. Six are on record for impeachment. The rest won’t say where they stand. They’re in binds. Their party’s base voters are rabid for impeachment. But Republican and independent voters aren’t. The centrists wish impeachment would disappear.

But wishing won’t make it so. Nancy Pelosi, Adam Schiff, and Jerry Nadler are seeing to that. The 25 fence-straddlers need to declare now whether they back their leadership’s efforts to stage what amounts to a coup. The pressure needs to come from the grassroots in their districts. It needs to start now and not stop until answers are gotten.

The (Goon) Squad, which typifies the radical left that now dominates the Democratic Party, have a bloodlust. They want to destroy Donald Trump. On bogus charges. Any halfwit can read the Zelensky conversation transcript to see that Trump committed no crime, no impropriety. But Adam Schiff makes up dialogue as he goes. It’s very Stalinist. Leftists don’t care about the truth – now or historically. They care about power – acquiring and exercising it, often ruthlessly.

The GOP and conservative independent expenditure groups have begun campaigns in the centrists’ districts. It’s about holding their feet to the fire.

Per the Washington Times article:

“Democrats in Congress have made it clear that the left’s crazed drive to remove Trump from office is far more important to them than improving the lives of their constituents,” Congressional Leadership Fund President Dan Conston said in a statement.

President Trump is branding the Pelosi-led House Democrats as “do-nothings.” That’s not just rhetoric. Democrats, mired in political derangement and obsessed with power lust, refuse to act on prescription drug pricing, infrastructure, and a border wall – among other key issues. Why? They don’t want any credit to go to the president. Petty politics? Not when it hurts Americans.

Rasmussen Reports lists the 31 Democrats who represent districts that Trump won. Most could be vulnerable next year.

It’s time for voters in these districts to rise up. It’s time to ask tough questions of the six declared Democrats and the 25 other Trump districts’ reps.

Why the lies about Trump? Why the fraudulent charges from your leaders? Why the drumbeat since before Trump’s inauguration for his impeachment? Russia collusion was a fraud. Now Ukrainian collusion is a fraud. Why aren’t House Democrats and you not attending the nation’s real business? And for the fence-straddlers: Are you for or against impeachment? No wait and see. No weasel words.