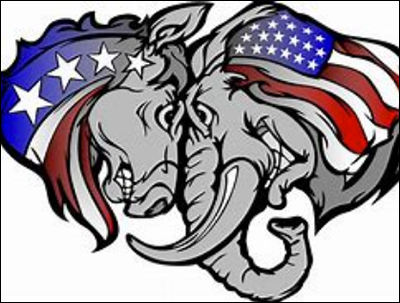 One of the extraordinary things about President Trump is the extent and intensity of feelings among those who dislike him. If you’re making a list, don’t plan on being able to finish it over a quick RC and Moon Pie from 7-11.

For those who like him, it can be off-putting. Surveys do show the overwhelming majority of Republicans support the President. It is typically somewhere in the mid-80s. To be frank, if he doesn’t have a huge majority of GOP voters at this point, he might as well just ask what kind of beer the White House should begin stocking for Sleepy Joe or Fauxcohantas, fold his tent, and go home.

Their rage is barely containable. If you think a Trump statement is hateful, wait until you hear the media’s response, Anti-Trumpers, or Corey Booker blaming him for everything from mass shootings to the heartbreak of psoriasis.

What people dislike about a politician may be tough to nail down. People have attempted to explain why liberals loathe him, written about how 2016 was a choice between two bad alternatives, as well as discourses on how much the world detests him. The latter is particularly amusing.

Who thinks the success of an American President should be measured by what the rest of the world thinks of him? If you want to know if Boris Johnson is doing a good job, do you ask the people of France? If you want to know what kind of year the Dallas Cowboys are going to have, do you survey sports fans in Philadelphia?

People should not be surprised that President Trump is less popular internationally than his predecessor. Obama followed the lead of the global literati, licked their boots, gave them sloppy kisses, offered every major policy concession they wanted, and couldn’t walk by a microphone without saying how terrible America is. Of course, foreigners liked that. Obama basked in their praise, while he was unconcerned if someone from Terre Haute took offense to his obsequiousness.

Trump is very direct: he pledges to do what is best for America. It says a lot about how anti-American much of our nation has become that Trump’s loyalty to country is considered conduct that would be unbecoming a drunken Neanderthal. Put America first? What are you thinking? An English diplomat recently complained that Trump had an America First agenda. Well, good. He ought to, but most of the passengers currently in the Democratic presidential candidate clown car don’t seem to agree.

Much of the hatred of Trump is a question of style. He’s nothing if not confrontational, opinionated, and often rude. It’s in his DNA. It’s the way he is made. Trump is as likely to announce he’s hired Rachel Maddow as Secretary of Political Correctness as he is to give up Twitter. He takes definitive stands, defends himself, attacks and belittles his opponents, and seems to take much of it personally.

If that “ain’t your cup of tea,” you’re not alone. We get it. However, those who make voting decisions based on the actual accomplishments of our elected officials have a more difficult decision to make.

The mere fact that he fights back is unusual for a Republican president. We’ve had a series of post-Reagan Republicans on the national scene who seemed to think the winner of the political wars will be the person who plays nicest. It doesn’t matter if you lose a political battle. The thing that matters is would your neighbors bring over a casserole for your family if you wound up on the wrong side of the dirt one morning?

I admire Senator Dole, the Bushes, both George and G. H. W., and agree we should try to be polite and constructive. When that fails, we need to be willing to have a good old-fashioned bare-knuckle fight. When your opponents are lying, or are promoting policies that will damage the country, is it admirable to stay silent? No.

How strong are your values if you are unwilling to defend them when the argument gets tough? I would argue that true courage requires a willingness to both take a stand and to defend it. Allies who turn tail and run the first time the battle gets tough aren’t a lot of use. Unless you think the stakes aren’t very high, you had better be willing to show up when needed.

We now have a president who doesn’t take crap off of anybody, and a lot of people think it’s about time. And he’s masterful at defining his opponents. If Jeb Bush ever runs for office again, how hard will it be for him to shake the reputation he is “low energy?”

Nearly every person who supports Trump has said “Why can’t he just stay off Twitter for a while?” I guess they figure that Lincoln never Tweeted, watched no cable news, and wasn’t on Facebook! Yet he did well for himself.

The next time someone says “I wish Trump would quit being so afraid of offending people,” it will be the first time. It’s like saying “Please pass me the piano,” or, “Jerry Nadler needs to put on a few pounds.” No one has ever said it.

Meanwhile, America benefits from having a president who has worked to keep many of his promises: less regulation, lower taxes, strengthening the border, negotiating better trade deals, reaching record low unemployment. Even those who don’t like the way Trump fights enjoy the benefits of him being willing to do so.