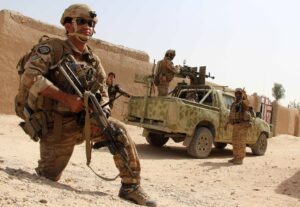 It’s important to note that I soured on the U.S. occupation of Afghanistan about the time Donald Trump decided to seek the presidency. Millions of Americans had come to that conclusion before I did. They were right much sooner.

Like these millions of Americans, I’ve grown weary of fruitless – in fact, ludicrous – open-ended wars. Following 9/11, I thought changing the equation in the Middle East and near Asia was worth a go. I was for installing pro-American regimes – or, at least, regimes that wouldn’t harbor anti-American terror groups.

That aim has only worked with an open-ended U.S. military presence in Afghanistan. Afghanistan hasn’t been annexed by the U.S. It’s not our territory, nor should it be. A 20-year commitment there was unexpected. In hindsight, we should have been in and out of that ancient land in short order, having taken out Al Qadi and Taliban leaders. But the U.S. “military-industrial complex” benefits from wars, so U.S. involvement dragged on.

Candidate, then President, Donald Trump said, “No, no, we need to leave.” He was right – and the DC establishment gave him holy hell for being right.

Iraq and Afghanistan were the principal targets in efforts to “regime change” and “nation build.” Neither have worked. Iraq is racked with turmoil, political intrigue, and Iranian interference.

Most conspicuously, after a 20-year occupation, three-quarters of a trillion dollars spent, and 3,000 dead American soldiers, the American-backed Afghan government is collapsing like a House of Cards before a Taliban onslaught. Estimates are that the government of President Ashraf Ghani will be run out of Kabul by 9/11, at the latest.

The Afghan government’s precipitous collapse is thanks to Joe Biden. While Biden mimicked Trump’s very popular commitment to extract U.S. ground troops from Afghanistan, his stringer-pullers at the White House failed to back up that pledge with threats of tough action should the Taliban seek to exploit an American withdrawal. Trump, per former secretary of state Mike Pompeo, made it clear that the “Trump administration had established ‘deterrence’ protocols to ensure that the Taliban continued to behave once the withdrawal actually began.”

But let’s not kid ourselves. Unless the U.S. maintained an indefinite commitment to propping up the Ghani regime, the government would fall in time.

Yet make no mistake, Joe Biden invited this ignominious and calamitous collapse. Jen Psaki, Biden’s featherbrained White House mouthpiece, said that the Biden administration was counseling the Taliban to behave if they cared a wit for their “international standing,” as if that matters to fundamentalist Muslims intent on governing Afghanistan like it’s the Dark Ages. Biden’s handlers have had to send back troops to Afghanistan to make sure the U.S. embassy isn’t overrun.

Anyone want to guess the level of contempt the Taliban has for Biden? Weakness doesn’t invite aggression?

Twenty years in Afghanistan – blood and treasure wasted. When the Taliban takes control of the country – slaughtering and imprisoning America’s remaining Afghan allies in the process – the U.S. will have nothing to show for the costs and sacrifices.

The U.S. must get out of the military adventurism business. Nation-building is a conceit. America’s duty isn’t to “Make the world safe for democracy.” A proper U.S. foreign policy related to a Taliban-controlled Afghanistan should rest on this declaration: “If you take any actions against the United States or its interests… if you harbor terrorist organizations that have as their aim harming the American people … we’ll destroy you. And we don’t need boots on the ground to do that.