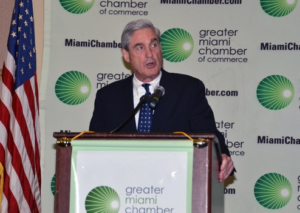 On a related point, you may recall the Attorney General at the time, Loretta Lynch, met privately with Bill Clinton, on an airport tarmac in Arizona. Stunningly, coincidentally, the following Monday it was announced the Hildebeast (a name I believe I made up, by the way) would not be prosecuted.

Lynch claimed the meeting was a chance, unplanned encounter where the two talked about things like crochet, favorite recipes, and grandchildren. We are supposed to think they talked only about family and hobbies and did not happen to mention the fact that Bill’s wife was under active investigation by the DOJ. Later, of course, it was revealed through DOJ memos and emails the meeting had been planned and was not a chance encounter at all. A cynic, or an intelligent person, would recognize the whole thing stinks.

How many women have been alone with Bill in private aircrafts and not learned firsthand (poor choice of words) why they call him Peyronie’s Bill? Lynch is lucky she got out of the plane with her honor intact. Such as it is.

Lynch lied about it and no one in the mainstream media or the DOJ even cared. Obama also gave us Eric Holder, the only U. S. Attorney General ever held in contempt of Congress. His punishment? Nothing. He should have at least been sentenced to watch the View and Joy Reid on a loop for a week or so straight. Although that would certainly have been thrown out based on the Constitutional provision prohibiting cruel and unusual punishment.
But I digress.
Then there is Hunter Biden, a man with the morals of Larry Flynt’s scummier brother. Hunter has had challenges with substance abuse, of course, and good on him for fighting it. But it would be hard to find a less ethical, decent, or in any way admirable mammal extant. His partner and corporate CEO, Tony Bobolinski, provided clear evidence of Biden family corruption. He managed the business end of the $1.5 billion the Chinese Communist Party/government gave them to invest. He testified Joe knew all about it, was involved, and got paid from the deal. Recall this is something Joe has said he has never even discussed with his son. Where is the FBI investigation and outrage? Non-existent.

Hunter’s laptop has photos of him partying with prostitutes, sex with minors or near-minors, crack smoking, and more. No one – not Hunter, not Joe, or anyone – has denied the laptop is Biden’s.

Also, the FBI had the computer, with evidence relevant to the Ukraine issue, in their possession even as Trump was being impeached. Got it? The agency had new, relevant evidence in their position and didn’t bother to mention it. How much evidence of their corruption do we need?
In the meantime, when Chinese spies were caught stealing intellectual property and lying about it all, the Biden DOJ simply decided not to prosecute. Is it possible they were let go because the Biden family is on the take? Call us cynical, but there are 1.5 billion pieces of evidence the Bidens are owned by the Chinese.

Perhaps an even more disgusting, and evil, decision from the Biden DOJ and FBI was not to look into actions of four Democratic governors who directly caused tens of thousands of Covid deaths in nursing homes. They forced those facilities to take Covid patients, thus enabling wider spread of the illness, and placing a burden on them for which they were not prepared. You would think actions that lead to actual deaths would be a higher priority than, say, making sure people use the right pronouns for co-workers who were born male but now identify as cross-dressing rabid honey badgers. You would be wrong.

There is a two-tiered justice system in America. It involves disparate treatment of leftists versus Republicans, but also much more than that. The FBI is committed to preserving a permanent political class, of which its leadership is part and parcel, along with an elite upper class of government, big tech, and mainstream media that exist to promote their own wealth and power. There are a lot of establishment Republicans who despised Trump, and worked with him hesitatingly, if at all.

Donald Trump was a threat to the established political class, Ds and Rs alike. He was not one of them. He, moreover, didn’t a flying f**k what they think. That, more than anything, enabled him to come across as an outsider. This billionaire media-savvy darling of the Manhattan social set was the most unlikely of heroes for the average guy and gal. And we do wish he was less flawed. (I wish I were, too.) But his key messages and policies were spot on.

As a threat to the wealth and power of people like the Bushes, or Paul Ryan, or the losers from the Lincoln Project, Trump could not be allowed to succeed. Unfortunately, the FBI was more than happy to do their part in trying to get rid of him.

As Byron York has outlined, the FBI sought and got FISA court warrants, verifying the veracity of evidence they knew was false, unconfirmed political research by the Clinton campaign. They modified email evidence to make Trump accusers look credible. They worked with sources they knew had political motivation. Their staff was openly prejudiced against Trump. Robert Mueller hired nothing but anti-Trump lawyers, who themselves had been chastened for previous unethical acts. And they STILL couldn’t come up with a Russia-related crime with which to charge anyone.
A body that investigates crimes and works with judicial entities, regardless of the political views of those being investigated, is essential to our continued freedom.
This just in: the FBI no longer fits that description.