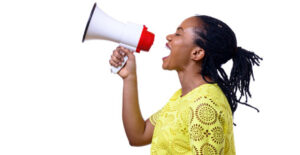 Don’t Be Afraid to Defend Your Views

As we’ve said before, neither major national political party fully deserves our fealty. However, you do have only one choice if you believe in constitutional government, individual rights, freedom, capitalism, and American exceptionalism.

Third parties? Maybe someday. But if you vote third party for president, at this point, you are throwing your vote away. Sorry, but that just happens to be the truth. In presidential contests, as in choosing a political party, Americans face a binary choice. If you want to be relevant, to matter, you have to side with the Democrats or Republicans. That doesn’t mean you have to be blindly loyal, but it does mean you have to have a default position for or against one side.
[DISPLAY_ULTIMATE_SOCIAL_ICONS]

A second, equally important point, is to recognize that, unless the parties are the same in all respects (this just in: they are not), then one party must be better than the other. Depending on what you value, one of any two parties must be preferable to the other. That can’t not be true.
Would you rather be boiled in oil, frozen to death, or burned alive? Uh, well, none of the above, right? But IF you had to pick one, you probably could. (For me, the worst possible way to spend eternity would be being forced to watch reruns of Rachel Maddow, the View, and Hillary Clinton speeches on a loop, 24-7.)

Those who constantly complain that “Both parties suck, all politicians are scum, and I don’t like any of them” may be voicing understandable sentiments, but their position is spectacularly unhelpful. You don’t help win a battle by refusing to join in. Somebody is going to be president. If you refuse to voice a preference you are, as they say, part of the problem. That may not be comforting, but the world doesn’t exist to comfort us. We live within the immutable laws of this world, this life, or we sit on the sidelines. Again, just happens to be the case.
This is also not an unusual dynamic. Life is full of imperfect choices. Most people would not claim to have the perfect job, house, car, spouse, or kids. Not if they were being honest. Does that mean they don’t have a great job, house, car, spouse, or kids? Of course not. They are probably great. But not perfect. In politics, far too many of us let the perfect be the enemy of the good.

A friend says that the political parties are like venereal diseases. Please forgive the crudity of the analogy, but it is spot one. The Dems are syphilis, the GOP gonorrhea. You don’t want either of them. But if you had to have one, you’d choose gonorrhea. What a great rallying cry! Vote gonorrhea!
Admitting our candidates and parties are not perfect does not lend itself well to persuasive messages. “We’re not as bad as the other guy,” or “We suck less!” are not good themes.
Likewise, I would not advise you to tell you wife, as you drift off to sleep, “Honey, I love you, even though you are not perfect.” Give that a shot and let me know how that works for you.

By the same reasoning, if you support Trump, you don’t put a sign in front of your house that says, “We like Trump even though he is kind of a jerk.”

It is usually understood that endorsement of, support for, a person, party, or product doesn’t mean you assume it is flawless. That much is assumed and shouldn’t need to be said.

Various studies have shown that conservatives are more hesitant to express their opinions than moderates or leftists. And by substantial margins. That is one reason public polling has been so inaccurate in recent elections. Trafalgar, the most accurate poll in 2020, recognizes this and has done a good job of finding tactics to compensate for it. Another reason Trafalgar is currently the best is that they are committed to reflecting opinion, not affecting it.
See here a terrific piece by Jonathan Davis on the many ways in which conservatives are afraid to speak out. Many leftists and even moderates also shy away from expressing their opinions, but in much lower percentages. What should we assume is the result when patriotic, conservative Americans are hesitant to express their opinions? Does that help in any way?
This is also a reason so many political elites look at Twitter and assume it is a mirror of America. In truth, Twitter is dominated by the left, and the platform openly censors, de-platforms, and undercuts conservatives. So, when officials assume Twitter is a mirror of America, they continue to believe their actions have broad support. Even if they don’t.

Let’s ask ourselves: are we afraid to enter the fray, are we sitting on the sidelines, have we been shamed into keeping our views quiet? Why? Why in the world would anyone let a terrifically flawed opposition candidate or party pressure them into not speaking out? Are you that afraid of criticism or being ostracized?

Come on, seriously. If you are trashed by a bunch of far-left activists, who don’t particularly like the country, complain about it all the time, and want to change everything from football to elections to Christmas, who gives a rat’s ass? Are those the kinds of people you want to identify with anyway? How much fun can they be?

In all seriousness, are you embarrassed to say you are conservative, are you afraid to say you like Trump, or hesitant to admit that leftists are doing huge damage to this nation? If so, you are doing exactly what the leftists, and all those who want to bring this country down, want. You are playing into their hands. And your silence, ultimately, may be one reason they win.
Concerned citizens, who love and care about their country, have an obligation to support the better choices for our nation. Not the perfect choices. Life doesn’t usually offer you a perfect choice (My wife is perfect, of course. She is the exception to the rule. That’s my story, and I’m sticking to it).

Take this to heart. If you love this country, believe we are a force for good in this world, want to continue to fight for freedom here and to bring its blessings to the rest of the world, it is time to speak up, stand up, and be counted. If not now, when?