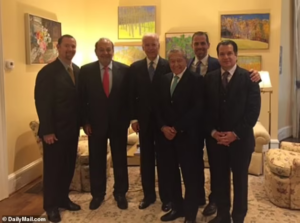 “What do you call a thousand politicians lying on the bottom of the ocean? A good start.”
[DISPLAY_ULTIMATE_SOCIAL_ICONS]

Those who campaign for public office are often assumed to be dishonest. Some of Bill Clinton’s supporters commented he is an extraordinarily good liar. Nixon had to resign because of his inability to tell the truth and his willingness to cover up crimes.
The nation did well in a lot of ways under Clinton. But would you want your daughter spending a long weekend at Camp David with him? Really?

The important question is not whether Trump ever lies. The dispositive questions are: does he lie more often, egregiously, or dangerously than his counterparts? If there isn’t much difference, doesn’t it make sense to vote for the one whose policies are best for the country? (The answers, in order, are no and yes.)

Anti-Trumpers maintain that getting rid of Trump was more important than our economic health, the security of our borders, preserving free speech, or remaining a strong global advocate for freedom and security. In asserting that it was more important to get rid of him Trump than to preserve the health and values of the nation, they were spectacularly wrong.

For those who wear their anti-Trumpism on their sleeves, it was the easiest and least courageous of choices. They got to act superior, condescending, and elitist as they claimed, for example, that they could not tolerate a president who (apparently) slept with a porn star. Never mind that I can name anti-Trumpers, who used to be GOPs, who say they cannot tolerate Trump’s immorality while, at the same time, they have cheated on their wives (and I can name names). I won’t call them out, but they know who they are. Ant they should be ashamed of their posturing and virtue-signaling.

You have to admire the ability of leftists, Democratic leadership, the media, and anti-Trumpers to both surprised and outraged that a president would lie. Who knew? Knock us over with a feather.
There are even sites where you can find a list of Trump’s 39,459 most significant lies. You can also find similar totals for previous presidents. So what? Politicians are people, and people are not perfect. You do not have the perfect job, spouse, or children. You therefore choose the better among imperfect choices. That is precisely what we must do in selecting a president.

I don’t mean to suggest truth doesn’t matter. Of course, it does. But it does not add credibility to your argument, nor does it benefit the republic, if you condemn one person or party as liars and completely ignore the same behavior by those you support, or by yourself.

Count me among those who wish we had better candidates, better choices, and higher morality among our political officials. I also wish humans in general were more honest, ethical, moral. No one would want everything they have said or done on the front page of their local paper. No one. Not you, not me, not your cousin’s friend’s next door neighbor.

The current occupant of the White House has a long history of lying and scandal. He had to drop out of a presidential run decades back because he perjured the speeches of Neil Kinnock, in England. He told a variety of lies about his own academic career, as outlined here in the left wing publication Mother Jones.

Pictured in this post is a photo of Joe and Hunter Biden together, at an event, at the Vice President’s residence. They are posed with Hunter’s “business” contacts and partners. Never mind that Joe has repeatedly claimed he has never talked with his son about business, never met these people, and never did anything for them. If we had an honest and effective news media this would be the end of him. Of course, we do not.

Perhaps most repulsively, Biden said for many years the driver of the truck, that hit and killed his wife and kid, drank his lunch and caused the accident. It is a tragedy. A decent person would grieve for their loss but not look at it as a way to get more sympathy by lying about the person who hit them. As we see here, there is no evidence the man was drinking, and his own family suffered from Biden’s lies. What kind of lowlife loses his wife and then lies about it to get sympathy?

The bottom line: all people lie, and some more than others, but there is nothing unique or more extreme about Trump’s prevarication than any of the other choices we have faced for president. Maybe someday we will have a choice between two perfect candidates for president. Until then, the proper and constructive strategy is to look at the policy differences between the candidates, and to look at their records in office, and choose the one best for the country.

The failure of some to do that is the reason we are today in crises at the border, overseas, and domestically. The left and anti-Trumpers gave us this disaster. They own it. Let’s hope we all choose better next time.