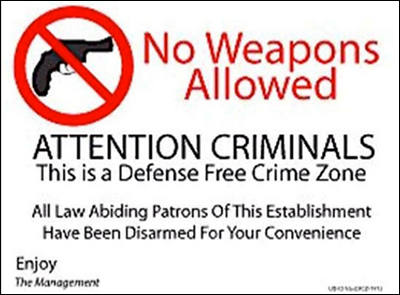 It probably shouldn’t be necessary to expound on the horror of mass shootings. Anyone who doesn’t understand, or share, the sentiment, isn’t deserving of a seat at the table of rational discourse. That said, it’s possible there isn’t an issue where political hypocrisy is more pervasive.

For years, the cry from conservatives was “When guns are outlawed, only outlaws will have guns.”

The cry is “we must do something.” But what? I think what most folks as saying is “we’re devastated, grieving, and wish it would stop.” Well, yes. We all do. But wishing something would cease is unrelated to whether there is a way to stop it. If there were workable, logical things that both respected the Constitution and saved lives, we’d see a national consensus in favor of it. Unfortunately, there is no such easy solution.

This is also an example of where survey research is not very useful. When asked if you support common sense gun reform, well, who isn’t in favor of that? It’s like asking if you support government doing good things and making smart decisions. Duh.

Many on the left protest they are not advocating outlawing guns. In fact, many are, including the current leader in the polls for the Democratic presidential nomination. Joe Biden is advocating banning “assault weapons,” including buying them back from people who legally own them.

The most popular rifle in America, the AR-15, would presumably be taken from some 8 million people who own one, have never committed a serious crime, and are no threat to do so. There are roughly as many guns in America as there are people. How, exactly, in a free society, with a constitutionally protected right to bear arms, do you get rid of them? How would a ban work? How do you make them go away?

The chances of ever getting rid of them are the same as the odds of Al Gore suddenly developing a personality. It’s odd that many who are terrified at the thought of police going door-to-door to arrest illegal aliens don’t seem concerned about the specter of the same officials going around taking away guns. Neither visual is comforting.

There’s a difference between the political parties on this, and it’s revealed in the opinions of party leaders, candidates, and members. Surveys show much higher support for anti-gun laws among Democrats than among Republicans. About half support a total gun ban. Keep that in mind next time you hear someone whining that “no one wants to take away your guns.” Nonsense. Yes, they do.

President Trump has expressed a willingness to work with Democrats in Congress to identify workable gun control measures. Good for him. If something can be done that does not violate the second amendment, but could make a substantial difference in preventing murder, go for it. Unfortunately, those are big hurdles to clear.

We’ll be discussing this more in the weeks ahead. For now, let’s share this thought. John Lott, probably the single most knowledgeable person on the planet on this topic, was asked how many mass shootings in the past century would have been prevented if all sales, including private transactions, required background checks. The answer: zero.

Never mind, the thinking goes, at least we’re doing something. Just doing something may make you feel better, but if it doesn’t make a difference you will be disappointed. We could also address crime by making everyone wear green shirts, forbid use of the word panache, or require people to wear gorilla costumes on Tuesdays. None of those things would make a difference either.

Perhaps we replace the death penalty with a requirement that serious felons be forced to spend the rest of their lives watching reruns of “The View” on a continuing loop, 24/7, alternating with interviews with Michael Moore. That might be a more effective deterrent than the death penalty. On second thought, it would probably be ruled unconstitutional. Cruel and unusual punishment, you know.