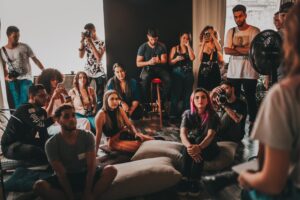 Today, we face political developments so damaging to the fabric of our republic that exaggeration is hardly possible. Do you believe the damage being done to our nation, in particular to the First Amendment, is defensible? If so, with all due respect, you are either uninformed, don’t understand the essential role of freedom in our nation, or are actively seeking to bring it down. There are no other options.
[DISPLAY_ULTIMATE_SOCIAL_ICONS]

Nothing is more important to our republic than freedom of speech. There is a reason it is spelled out in the First Amendment, and not the 23rd. Without the freedom to express your opinion, to interact with the government, to speak out against the powerful, then our nation cannot function. Period.

Freedom is what separates us from other nations, it is what motivated our founders, and devotion to it is the essence of American exceptionalism.
I grew up in a fairly conservative and politically engaged family. Political discussions were the norm at our dinner table. I learned why freedom is important. I’ve spent a lifetime working in public affairs for political organizations, non-profits, agencies, and companies. I earned a degree in political science and worked in campaigns from Washington, Indiana, to Washington, D. C.

Nothing in that experience has diminished the importance I place on freedom as the key value that makes our country special. (As a child I also listened, with unease, to coverage of the Bay of Pigs; took tours of bomb shelters that we could put in our yard; and helped put water, food, and other supplies under our house, in preparation for a nuclear explosion that thankfully never happened.) Many millions of people, thank God, share similar experiences and have similar values. But we are not winning at the moment.
It saddens me to see free speech under assault by the left and the paucity of normal Americans or political leaders who effectively fight for its preservation.

I used to assume that most, or all, people in America cherish freedom as much as me. I no longer believe that to be the case. Certainly, many millions, perhaps even most, of our citizens value freedom, but do they prize it enough to speak out, take action, and run the risk of being condemned by friends and family or ostracized at the office?

As the saying holds, there is no morality without courage. If you have strong beliefs, but lack the courage to speak out, ramifications be damned, you might as well have no opinion at all.

None of that means we have to look for a fight. But when the fight comes to us, as it has, we need to be up to the task. Cowardice is not an admirable character trait. Surrender is not a winning strategy.
Consider what happened this past week. We are witnessing fundamental assaults on our rights. That is no longer arguable. You cannot listen to the dreck thrown out by Jen “Circle Back” Psaki without recognizing we have crossed the line into officially endorsed governmental censorship. See here and here for more detail.

One of the most dangerous things government can do is to claim it has all the answers, or even any of them. When there is only one “truth” all truth is at risk. Who has sole ownership of the “truth?”
Consider climate change. We hear it is “settled” and there is “consensus.” As if scientific fact is determined by group vote. As we see here, many scientists do not believe climate change is a serious problem, or that man’s actions have a major role in it. Why should we not be aware of that, and free to explore and possibly reach our own decisions? Why do we, as a nation, champion college educations and then tell people to shut up, don’t ask questions, and believe what they are told? Isn’t curiosity and inquiry the basis of a good education?
There are dissenting views in science, health, economics, and Covidland. If the government censors them, how are we to learn? How can we develop sound policy looking at only one viewpoint?

If you look back a century, there was a strong consensus that certain kinds of people were inferior and should not be allowed to reproduce. It was called eugenics, and it helped, among other things, lay the foundation for efforts like Planned Parenthood, as promoted by its founder, and enemy of unborn black children everywhere, Margaret Sanger. The scientific support of eugenics was strong, and dissenters, in today’s world, would be banned by Biden and his social media minions. The majority is sometimes wrong.

Let’s circle back to Psaki. This past week she – the (God help us) official mouthpiece of the U. S. President – said, proudly, that the government is working with Facebook and other platforms to censor speech they believe to be nonfactual or inappropriate. They said they are working with cell phone companies to censor texts. And that anyone thrown off of one social media platform should be removed from them all.

Got it? One platform says you can’t post on their site, so all of social media should do the same. Just because the leftist fascists running our country don’t want you to say anything of which they disapprove. If that isn’t the definition of censorship, totalitarianism, fascism, coercion, then those terms have no meaning.

If this isn’t government power out of control, then what is? If this doesn’t bother you enough to get you to call a Member of Congress, write the White House, call talk radio, and speak you mind when chatting about politics at a meeting of the parent’s choir uniform subcommittee, then what is?

What would be egregious enough to get you riled up, if this is not? And, if it has to get worse before it bothers you, what makes you think you will, at that point, even be able to stop it?
Government’s excuse, of course, is that there is misinformation about Covid. On that they are right. But the solution to bad information is more and better information. The solution, for example, to the whining of a few racist people is to defeat them with the proclamations of a lot of good non-racist people. We should overwhelm bad speech, not ban it.

They say this is all for our own good. Of course. That is what totalitarians always say. Pol Pot did what he did for your own good; so did Mao, and Amin; Stalin did, too. But they did not operate in a nation where the Constitution – the basic rules outlining how the nation operates – specifically prohibits government censorship.

The First Amendment, in the Bill of Rights to the Constitution, directly prohibits what the Biden Administration is doing. It isn’t even debatable. But they are doing it, bragging about it, and are so unafraid of criticism they aren’t even subtle about it.
Note it matters not one bit that the censorship directives from the White House are being carried out by private companies. (Not to give anyone any new ideas, but if you hire someone to shoot your husband you are guilty of murder.)

It makes zero difference if governmental policies are implemented by private contractors, companies, or non-profits. If they are carrying out government policy, the government owns it. Courts have ruled on this.

The statements by the Biden Administration are revolutionary. The president’s spokesperson has calmly, quietly, admitted to the world that they, the Administration, are working with companies, which provide a way for people to issue private communications, to censor the comments of our citizens. These are communications between private citizens, and the White House has asserted it is their right to interfere.

If you are ever going to stand up for your country, there will never be a better time. Avoid the Christmas rush. Go to the spine rental concession if you have to. You will get blowback. But do the right thing (with apologies to Spike Lee). Don’t be the one who looks back and says, “I wish I had spoken out.”