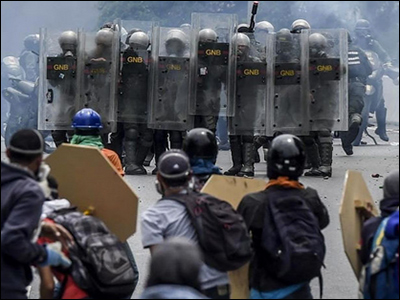 “To equate what goes on in Venezuela to what I believe is extremely unfair,” Sanders countered.

There are no Mariachi bands in Bernie Sanders’ version of socialism? No economic collapse. No food shortages. No overrun hospitals. No government jackboots and paid street thugs enforcing the government’s will. No Nicolás Maduro and his ironfisted disaster… in Venezuela – once a stable, peaceful, and prosperous nation.

He [Sanders] said his views are more aligned with policies instituted by progressive governments in Canada and Scandinavia such as single-payer health care systems, guaranteed paid medical leave from work and higher minimum wage standards.

Sanders also stressed that for him, democratic socialism is defined by a commitment to address wealth inequality and curb the concentration of power — issues he said are ignored by both Congress and the press.

If you take the Vermont senator at his word, he can’t be a socialist. Bernie would be a welfare statist.

Canada has government-run healthcare, true. That’s why many affluent Canadians choose to come to the States or go elsewhere for procedures. Government-run anything doesn’t afford the best quality. Canada has a welfare state, but it’s not heavily redistributionist. It’s closer to the social safety-net model.

Critically, Canada’s economics are government regulated capitalism. Canada is a generally affluent nation thanks to free enterprise. Per the Heritage Foundation’s 2019 Index of Economic Freedom, Canada ranks an impressive eighth in the world. That’s just behind Great Britain and four spots ahead of the U.S. How’s that for a surprise?

Scandinavia is a region, not a country. Perhaps, Bernie means Sweden? Sweden is a favorite of socialists. They cite it as a collectivist’s dream come true. Except Sweden isn’t what the left mythologizes. It leans more Canada’s way.

About Sweden from a National Review analysis, May 2, 2019:

Sweden in fact is pretty much as “capitalistic” as is the United States. It’s Minnesota writ large. Not writ all that large, actually, with merely 9.3 million people, many of them now foreign-born, compared with the 5.3 million Minnesotans, 10 percent of Swedish descent. Like the Land of 10,000 Lakes, Sweden is a place of private ownership and thrusting inventors, Swedish bachelor farmers and pretty generous social provision, pretty good schools (with vouchers) and terrible weather.

The classic definition of socialism is complete government ownership and control of the means of production. It’s massive society-wide redistribution of resources. Where true socialism has been tried – the Soviet Union, Mao’s China, Castro’s Cuba, Maduro’s Venezuela – deprivations, hunger, and ruin have followed in its wake.

In his heart of hearts, Bernie may be a rosy-red socialist. But the countries he cites clearly aren’t socialist redoubts. But, make no mistake, Bernie’s profligate welfare statism and push for even more government economic interference would damage the U.S. badly.

Bernie may not be Maduro, but he’s a pox in his own right. Elect Bernie president, court disaster.