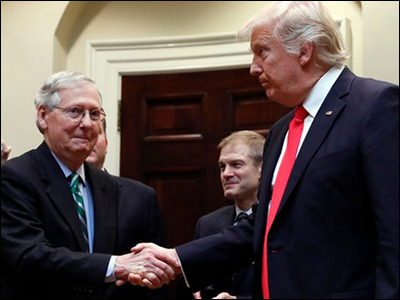 “As of today’s confirmation votes, Trump and McConnell have confirmed 150 judges to the federal bench — a group that can overwhelmingly be described as narrow-minded and elitist, favoring corporations and the powerful over the interests of all Americans,” said Marge Baker, executive vice president of the People for the American Way.

People for the American Way, a misnamed left-wing outfit is in full grouse mode. Why? Because President Trump just made his 150th appointment to the federal bench. The pace and number of appointments are historic, per the Washington Times. But there’s much more.

Critically, it’s who the president is appointing: conservatives. Not conservative ideologues with activist agendas like their “progressive” counterparts. But men and women who understand that laws need to be applied as written and intended.

Democrats want make-it-up-as-they-go judges. That is, judges who play fast and loose with laws if the laws don’t permit advancing their radical positions. The left lives to transform America. As Barack Obama once famously proclaimed as his intention.

Credit has to be given to Mitch McConnell and U.S. Senate Republicans. McConnell and the Senate GOP caucus can be a wishy-washy bunch. But when it comes to putting high caliber conservatives in the federal courts, not so.

Thanks to this partnership, Trump is even transforming the 9th Circuit courts, which have been a left-wing redoubt for years. The 9th just ruled in favor of the Trump administration in an important sanctuary case.

The president is far from done in reshaping the federal courts. A second Trump term will bring yet more quality appointments and the chance to decisively reshape the Supreme Court. Giving Trump a full eight years to remake the judiciary will impact for a generation.

Court appointments may not be as politically sexy and hot-button (save a SCOTUS nomination), but Democrats keenly appreciate their importance. They need activist courts to take America in a sweeping leftward direction. Liberty requires judges who are committed to “original intent.” The founders would wholeheartedly approve the president’s excellent appointments.