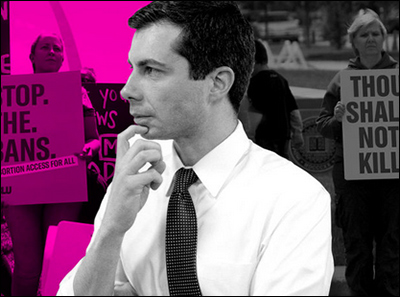 Evidently, the mayor [Pete Buttigieg] has decided that it’s to his advantage to embrace the radical, unpopular position of his party, advocating that a pregnant woman alone should have control over whether the unborn human being inside her is permitted to continue living, even after the point when it is able to survive outside the womb. He should at least have the decency not to twist Scripture in defense of his abhorrent decision, and to cease lecturing us about his superior understanding of Christian morality while he’s at it.

Buttigieg is for “first breath” because life beginning at conception means an end to abortions. It would mean a woman having her “right to choose” removed. It means flying in the face of the radical feminist agenda. Radical feminism is one of the “isms” that have dragged the Democrats far left. If you’re a Democrat presidential aspirant – if you want any chance at the nomination – you better toe the line.

Buttigieg’s argument is subjectivist pap. Biological fact can’t be refuted – if you’re honest. A baby is created at conception. A human being can be nothing else. From the get-go, a baby in womb receives nutrients from its mother to grow. Oxygen is supplied by the mother very early in the pregnancy. Only a sophist argues that a baby isn’t “breathing” in the womb. That argument is advanced by pro-abortion advocates playing a sly semantics game.

The standard medical text Human Embryology and Teratology states, “Although human life is a continuous process, fertilization is a critical landmark because, under ordinary circumstances, a new, genetically distinct human organism is formed” (8).

To repeat, from inception, the human organism (baby) is nourished, and then supplied oxygen. That’s not belief – that’s hard fact, and its undeniable. That a baby receives nutrients and oxygen from his or her mother makes him or her no less human. Dependency is irrelevant.

Buttigieg must think he’s being clever. Babies aren’t babies until they breath oxygen on their own. Its patent nonsense aimed at retailing a shabby excuse that killing unborn human beings isn’t really killing. Its an attempt to defend the morally indefensible.