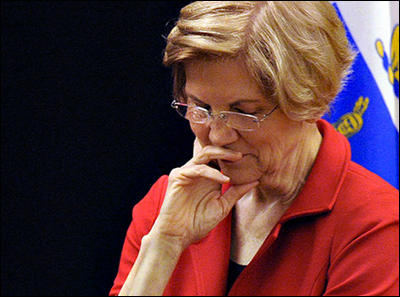 Senator Elizabeth Warren’s slow but steady rise through the 2020 ranks has officially put her at the top of the pack—albeit by a very small margin. The Massachusetts lawmaker officially overtook former Vice President Joe Biden Tuesday in RealClearPolitics’ 2020 polling average, polling at 26.6% as compared with Biden’s 26.4%. Warren is also notably the only candidate whose polling has steadily gone up throughout the primary, while Biden and Sen. Bernie Sanders, who holds a 14.6% polling average, have seen their popularity fluctuate and go down from their starting highs.

Bernie and Biden are toast. Neither man – both old, white, and wealthy – will be the Democratic Party’s presidential nominee. Comes news that Liz Warren is topping the Real Clear Politics poll averages. She was. Today she’s in a statistical dead heat with Biden. But that’s still a big deal.

Liz may be more than the flavor of the day. Who, among the remaining field, has the chops to top the Democratic ticket next year? Its vexing for Democrats because Liz is a candidate whose ethics are problematic. Actually, they’re disgraceful. Her chances of upending Trump are poor.

Liz is old, white, and affluent. She’s female, a radical feminist, and almost as left-wing as Bernie. All major advantages among Democrats. But Liz is also a world class liar. Years ago, Liz realized that she could scam her way up the ladder of success by claiming she’s part American Indian. She scammed her way into and through her education. She scammed her way into a prestigious teaching gig at Harvard. Prior to that, she taught law at the University of Pennsylvania. Law, and the teaching thereof, involves ethics, too, no?

Bernie’s recent heart attack has scuttled any hopes he had of leading the Democratic ticket. Not that his chances were strong to begin with. Bernie’s blank-check leftism would’ve never sold among independent voters.

Joe Biden? He appears to be as crooked as the sun is bright. Joe, via his bagman son, Hunter, is alleged to have siphoned off $1.5 billion in payoffs from the Chinese. Then there’s the Ukrainian fix. Rudy Giuliani asserts that Biden not only sold his vice-presidential office, he sold his senate office for years.

If that’s all true, Biden will go down as the most corrupt high officeholder in U.S. history. Even the Clintons must stand in awe.

Voters don’t expect candidates to be angels. Common sense dictates that this imperfect world is teeming with imperfect people. Yet, lawbreaking and egregious ethical violations are out-of-bounds.

Not incidentally, Liz was just caught in another lie. She claims she was fired from a teaching job when she was pregnant. This from Greg Gutfeld, Fox News, October 9, 2019:

Warren’s lies, however, fit a pattern. It’s victim karaoke — an opportunistic deception to exploit the plight of others.

… and to advance her own personal fortunes, Greg. If Liz Warren is nominated for president, a cruel fate awaits her. We wish the same for the Democratic Party.