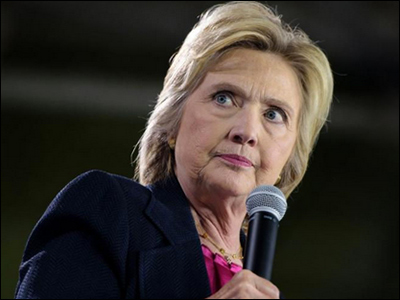 In the early morning hours after Election Day 2016, Hillary Clinton conceded gracefully, asking America to “give Trump a chance.” That didn’t last long. Months afterward, she came out swinging against the president. Last week, she called him an “illegitimate president.” On Monday, she claimed he violated his oath of office by pulling U.S. troops back in Syria.

Clinton may just be trying to increase her visibility to sell her latest book, but she may also be positioning herself to enter the 2020 Democratic presidential race if former Vice President Joe Biden falters — or should I say, continues to falter.

Steve Bannon swears Hillary will run for president next year. Evidence of Joe Biden’s wicked ways are piling up like stacks of hundred-dollar bills in a Chinese-owned Brinks truck.

The Democratic establishment knows certain doom awaits the party if Liz Warren or Pete Buttigieg – or lord knows who – seizes the party’s nomination. Democrat powerbrokers and “centrists” may turn their desperate, pleading eyes to Hillary. That’s right, that Hillary.

But what advantages does Hillary bring to a presidential contest in 2020? The better question is: What additional liabilities would Clinton bring to a rematch with now President Trump?

Let’s appreciate why a Hillary three-do is a lead balloon.

Hillary is a two-time loser – bigly. A little-known freshman Democratic senator of color edged out the heavily favored Hillary for their party’s 2008 nomination. Was Obama that good? No, Hillary was that bad. Polling from the start of ’08 consistently showed her negatives higher than her positives. Hillary had a big campaign machine and loads of dough. Yet Democrat voters preferred Obama’s unknowns to Hillary’s knowns.

Then came 2016. That year, it was Hillary’s turn, in an uncharacteristic coronation by Democrats. Her unstoppable election train was cruising. Her campaign bank account overflowed. The Lady’s Time had Come.

Except Hillary’s time didn’t come – to win, that is. She was beaten by a guy who revels in bare-knuckles brawls. Yeah, Donald Trump, who built a very smart campaign operation… who had his finger on the pulse of about half of the nation. Trump, sneered at by the establishment and MSM as a dealmaker and huckster, stole a march on the flatfooted Hillary in key bluish battleground states. Trump also raised oodles of moola too.

Hillary spent months after the November election in a smoldering rage… mouthing off wherever she could, blaming everyone but herself.

Like her hubby, Bill, she’s corrupted as hell. That stench of corruption was there in ‘08. By 2016, Hillary stunk like a loaded diaper sitting in a hamper for eight years.

Hillary is reptilian. That transcends a lack of people skills. She doesn’t connect with people. For Hillary, people are tools. Insincerity hangs like a pall on the woman. Voters sense this viscerally.

Hillary exudes Angry Woman Syndrome. A lot of women on the left are angry, militant feminists. They assume a persona. It doesn’t sell with most Americans. Ask Kamala Harris. Most women don’t have an ax to grind with dads, uncles, husbands, brothers, sons, boyfriends…

Now the topper. In 2016, Hillary had a serious health issue. She didn’t appear much in public, in part, due to her health. But she was caught on videotape more than once stumbling and fumbling.

The cliché goes that a year is an eternity in politics. But the smart money says that whoever Democrats nominate to square off against Trump next November is thumped. That’s thumped, not just edged. Hillary included. In fact, in a rematch, Hillary may be beaten worst of all.