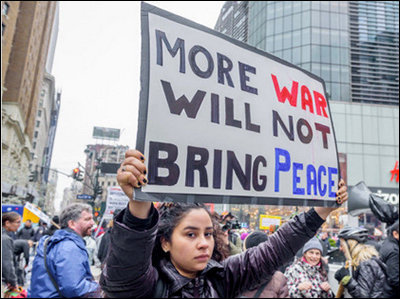 We expect neocons to warmonger. The likes of Bill Kristol. They’ve never met a conflict they didn’t like – or weren’t anxious to throw American soldiers into. But Democrats? Politics does make for strange bedfellows. It is 2019, though, and strange bedfellows seem to be the norm in Washington.

We hear that neocons and assorted RINOs are furious that the president isn’t hellbent to commit troops to aid the Kurds in Syria.

Joining them, Democrats, who are now on the warmonger bandwagon. You know, Democrats – the peace and love and global village kumbaya advocates. Well, yes, they gave Barack Obama a big pass in keeping the U.S. in Afghanistan and pushing the nation into other fights, but Obama was The Savior, so got passes.

It seems Democrats can’t help themselves this time, though. They’re anti-Trump reflexively. If the president came out for the absurd Green New Deal, Democrats might be half-tempted to jettison it and embrace the free market. The president wants the nation to stay out of Syria. The Democrats now want in.

Never mind that the Kurds and Syrians are informally allied. Remember Assad? The ghastly Syrian president who’s committed atrocities in the civil war in Syria? Never mind that U.S. troops would be up against Turks. Turkey is still a NATO member. It tends to complicate matters when putative allies shoot at one another, no?

The president has responded to the Turkish intervention smartly. He intends to impose punishing economic sanctions on the Turks for tangling with the Kurds. Trump is hitting Erdogan, the Turkish dictator, in his wallet. That sure beats having American lads and lasses killed in a conflict that has zero bearing on U.S. national security.

A Twitter follower, @RumseyJeff, tweeted cogently about the politics of the president’s Syria square off with Democrats. Wrote RumseyJeff:

Once again, the genius of @realDonaldTrump is shown for anyone who is watching. By bringing home our soldiers, a campaign promise BTW, he has put the #looneyleft on record to support war.

The president is proving to be the master at playing multilevel chess. He’s putting antiwar Democrats on record for war in Syria – and not incidentally, equally repellent neocons. And, yes, as RumseyJeff stated, he’s redeeming an important campaign pledge.

More than red state Americans are sick and tired of the open-ended military commitment in Afghanistan. That’s in its 19th year. Plenty of blue state voters oppose air-dropping U.S. troops into the conflict du jour. Enough blood and treasure have been spent in fights that aren’t ours. The president’s policy will woo some of the blue staters to vote for him. That matters in blue states that are competitive, like Pennsylvania.

President Trump is demonstrating how a great president dominates policy and politics.

2020 looks bleaker for Democrats with each passing day.