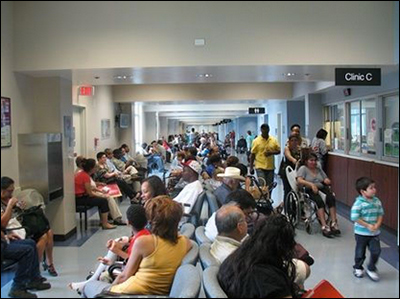 Sen. Elizabeth Warren, Democrat running for president, is proposing a “Medicare for All” scheme that tears a page out of the leftist fantasy playbook.

Not only would Warren’s plan for socialized medicine destroy Medicare for seniors, it would trash the U.S. healthcare system. It would create scarcity by overloading the system with new claimants. It would make take-a-ticket and waiting line healthcare the norm. Rationed healthcare services would become standard. Warren’s plan would drive up costs and impose $11 trillion in new taxes, thereby sucking life out of the economy.

The nation already labors under a staggering $22.9 trillion debt. Politicians and the finance world’s best and brightest tell us not to worry about the debt. It’s reminiscent of designers and engineers who swore that the Titanic was unsinkable. Adding onerous costs to healthcare and imposing heavy new taxes will only accelerate the rising national debt.

“Everybody gets the doctors and the treatments they need, when they need them. No more restrictive provider networks, no more insurance companies denying coverage for prescribed treatments, and no more going broke over medical bills,” she wrote.

Diagnosis #1: This is absurd blank-check progressivism. Warren is calling for unlimited access to healthcare without regard to costs and the supply of doctors, other medical professionals, and facilities. If no one goes broke paying medical bills, who, exactly, pays their bills?

The money to fund the proposal would come from existing federal spending on Medicare and Medicaid; existing state spending on health insurance; and existing private-sector employer contributions.

“Here’s the main difference: Individual health care spending. Over the next ten years, individuals will spend $11 trillion on health care in the form of premiums, deductibles, copays, and out-of-pocket costs. Under my Medicare for All plan, that amount will drop from $11 trillion to practically zero,” Warren wrote.

Diagnosis #2: When has government ever spent money more efficiently and effectively than the private sector? When haven’t audits – when they’re done – found substantial waste and fraud in virtually every government program?

“This has got to be a major initiative for Democrats; we don’t talk enough about waste in the government,” [Rep. Tim] Ryan replied. “If you look at the Medicare program, for example, there is $50 billion a year wasted in the Medicare program. That’s a billion dollars a week.”

Medicaid costs are expected to grow by 4% annually through 2021. Then 6% yearly through 2029. That’s in the neighborhood of a whopping 54% – 60% in higher costs over the next decade in that program.

That $11 trillion deficit will “largely” be made up with “new taxes on financial firms, giant corporations, and the top 1 percent—and making sure the rich stop evading the taxes we already have,” Warren claimed.

Diagnosis #3: That’s always the default claim by Democrats. Big corporations and the wealthy will foot the bill. But we all know that businesses pass on costs to consumers, thereby imposing indirect taxation. The wealthy will send their money overseas, if necessary, to shelter it. Or if they do get stuck paying confiscatory taxes, that’s less money for them to invest in U.S. businesses – meaning, an adverse impact on jobs and the overall economy.

We also know that there’s never as much money to raise from big business and the rich as Democrats claim. Inevitably, working- and middle-class Americans pay more in taxes and/or suffer the brunt of reductions in services. Or… politicians – sadly in both parties – charge higher costs to Uncle Sam’s credit card to avoid unpopular tax hikes. But the day will come when Sam’s credit card maxes out. What then?

A critical factor for seniors to consider is that “Medicare for All” betrays the promise made to them that Medicare was a program dedicated to their healthcare needs. Medicare recipients spent their working lives being taxed by Washington – via Social Security – to support Medicare. The pledge was that the program would be there for them when they needed it. The program was never intended to be blown into a socialized medicine scheme, where the needs of seniors are diluted and diminished.

Elizabeth Warren’s Medicare for All proposal is yet another lie told by the Massachusetts senator. Her proposal is bad for seniors, degrades healthcare for all, would hike costs through the roof, and boost taxes to confiscatory levels. Federal debt would soar. The economy would be crippled. The quality of healthcare would drop, while rationing would become standard of necessity.

If you want a healthcare catastrophe, vote for Elizabeth Warren.