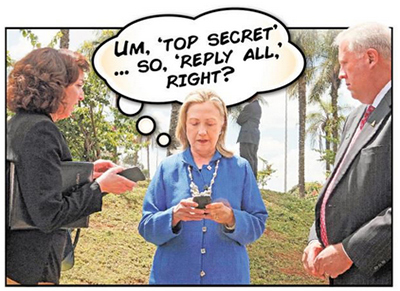 If there’s a sentient creature who doesn’t realize how one-sided are the mainstream media, the reactions to the recent report from the State Department on Hillary’s email wrongdoings provides all the proof you need. Many outlets, such as the Washington Post, said that it “clears” her. Well, no. The report does nothing of the sort.

To be fair, in order for a top-flight investigative reporter to know that, they’d have to actually read the report. Or at least the release that accompanied it. That bar is too high for a lot of Hillary sycophants. And most of them now dismiss continued criticism of Clinton as reflecting an obsession with her, Breitbart talking points, or some other condescending comment that absolves them of having to know about inconvenient facts.

The State Department report represents the effort of a department to investigate itself. (Many who cling to the paradigm that everyone is either a Democrat or a Republican don’t understand the critical importance of the professional political class in all this.) This president, who is committed to draining the swamp, finds himself constantly undermined by people who had jobs in Washington long before he came along. President Trump is fighting the elite, privileged, self-important swath of condescending professional pols, from any and every political party, who are threatened by his success. It is not remotely surprising that State tried to find something nice to say about their own people.

“Journalists” like Lawrence O’Donnell, Rachel Mad Cow, and the staffs of the Post, Times, and the East Nowhere Weekly Shopper, said repeatedly and clearly that Trump was guilty of collusion with the Russians. And they agreed with voracity-challenged Members of Congress like Adam “I was the donor in a successful personality transplant” Schiff. Not one of them, at last count, has apologized for their prevarication.

For comparison purposes, there have been an estimated zero high-profile media apologies for the years they said Trump colluded with Russia. The Mueller Report confirmed there was no evidence Trump coordinated with the Russians to impact the 2016 campaign. Not that the evidence was insufficient for prosecution; that it did not exist. In our judicial system, it is as complete a “clearing” as it is possible to get.

It’s never comforting to hear that corruption has been uncovered and will be investigated by the organization that is corrupt. It’s nonsense. If your wife or husband thinks you’re having an affair, try this: tell them you’ll look into it, investigate yourself, and get back with them. Let us know how that works out for you.

We hope Attorney General Barr and his team will ultimately prove to be capable of bringing justice to the table. We keep hearing the Horowitz IG report will finally be released and hold people accountable. And we don’t care who it brings it down. Let the chips fall where they may. Our fingers are crossed, but we aren’t holding our breath.

The State report contains a sentence they must have spent a lot of time writing that says there was “no persuasive evidence” of “systematic, deliberate mishandling of classified information.” O K. The story also did not find that Hillary wore chicken suits and under wear with Pee Wee Herman’s picture on it. But, so what?

They reference hundreds of secret communications, under management of the Hildebeast, on an illegal, unsecured server; it mentions some 38 individuals who may have had a role in these violations; confirms that she had set up an email system on a non-governmental server, a completely unprecedented action; all done to avoid scrutiny, transparency, and accountability. The lack of a systematic and deliberate corrupt agency-wide operation in a department does not clear anyone of accountability for criminal acts. If a crime is committed by accident, through carelessness, ignorance, or any other way, it is still a crime. The report from State is not an exoneration.

For those who only read headlines or need a refresher, here is Guy Benson outlining some of the wrongdoing and lies about all this from team Clinton. None of the points raised by Benson is disputed in the State report.

Interestingly, a legal issue at the center of her corruption is espionage. While usually thought of in relation to spying agencies or agents of nations or companies, it also includes, according to Merriam-Webster, “… the practice of gathering, transmitting, or losing through gross negligence information relating to the defense of the U.S. with the intent that or with reason to believe that the information will be used to the injury of the U.S. or the advantage of a foreign nation.” Note, the original draft of the FBI report from Jim Comey referred to Clinton’s actions as “gross negligence.” It was then edited to say “extreme carelessness” instead. A distinction without a difference.

Espionage laws are broken whenever people transfer classified information to an unsecured place. Hillary set up a separate, personal email system to avoid accountability and transparency, and didn’t do it by accident. It was an intentional act. You don’t just happen to set up a separate email system when it would be far easier just to use the secure one the government has set up for you and requires you to use.

The last item, of course, is unknowable. We cannot, by matter of logic, know something didn’t happen. Hillary’s deceptions, incompetence, or whatever you want to call it may have had no effect on anyone. Or, it may have led to the identification, capture, torture, and death of dozens of U. S. citizens, operatives, soldiers, and allies. We will never know, because, literally, it is one of those things that can’t be proven to NOT have happened.

You can never prove something didn’t happen; you can only prove that it did. Think of a state you have not visited. Got it? Good. Now, prove it. Prove you haven’t been there. Exactly. It can’t be done. We can never know, and will never know, what damage her corruption has caused.