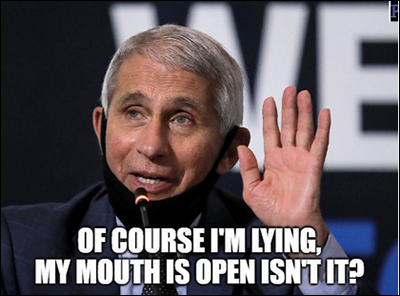 The situation has been exacerbated by the willingness of social media outlets to censor information. Also culpable is the mainstream media, as they have largely abandoned of any pretense of objectivity. Most major media outlets today openly champion one political viewpoint or another, and few even make an effort to appear unbiased.
[DISPLAY_ULTIMATE_SOCIAL_ICONS]

The latest example of where the mass media, social media, and much of America “got it wrong” is, unsurprisingly, related to Covid. And to Anthony Fauci in particular.

We have been “told” that masks work and are essential to preventing the spread of Covid. We are expected to believe that government has the authority to tell us whether we can leave our homes, go to church, or visit a restaurant. We were told the virus occurred naturally and that government was “following the science.” It was nonsense. And, sadly, most Americans gave little thought to whether these mandates made sense, whether government has the power to impose them, or whether they were based on sound science or good information. Some people were concerned, of course, but most citizens simply bent over and said “Thank you, sire. May I have another?”

In fact, state governors and the Biden Administration, pretend to “follow the science” when it happens to coincide with their political goals. Tactics that made them more powerful were embraced, and if they happened to be backed up by science, so much the better. If the science did not support a proposed policy, but it built their power and reduced your freedom, they did it anyway.

Schools are the top example. Schools have never been found to be a key source of transmission of the virus. Virtually no contagion has been linked to the classroom. Young people are the least likely to develop serious cases and are at low risk of death from Covid. Yet, schools were shut down, parents suddenly had to find a way to take care of their kids during what is usually a school day, and millions of children were denied in person learning.

Supposedly, essential workers stayed on the job. First responders, truck drivers, grocers. Oddly, teacher groups essentially took the position that teachers are not essential. I would have thought they were. But no more.

Schools closed because teacher unions didn’t want them open. “The science” said open the schools. The unions, who supported Biden, said “no.” So politics trumped science. When you hear Biden claiming to be following the science, you know he is lying. Or just watch to see if his lips are moving.

Which brings us to Fauci. The newly released emails, obtained through a FOIA (Freedom of Information Act) request, show several astonishing things. Well, astonishing if you still believe anything government tells you.

We have seen previously that Fauci was inconsistent. He changed his positions more often than Liz Taylor changed husbands. He was against masks, for them, then for wearing 2 or more, etc.

Newsweek (do they still exist?) summarized some findings from the emails, here. USA Today summarizes them here. Both provide good summaries and demonstrate the dishonesty of government and Fauci himself.

The emails, which were never intended to be made public, show Fauci said flat-out that masks don’t do anything to keep you from getting infected. Got that? Millions of Americans have been forced to wear a face diaper, often outside or even in your own home. We have been criticized and derided if we did not want to wear one. Our families and neighbors chastise us if we dare not to wear a mask. But it turns out the individual, the person who had the lead role in determining federal recommendations, KNEW from the start that masks didn’t work. That didn’t stop anyone from telling you to wear them. They care more about their own power than your freedom. And it isn’t even close.

In addition, the emails show clearly that Fauci knew the virus might have come from the lab. Not necessarily released intentionally but created in the lab and possibly released accidentally.

When you think about it for five consecutive seconds, it is silly NOT to realize a virus that originates in Wuhan might have come from the Wuhan Institute of Virology. It would be stupid not to know that is a possibility.

Now, even mainstream (formerly legitimate and objective) newspapers like WAPO and the NYT are reporting the virus probably came from the lab in Wuhan.

Biden, for his part, seems disinterested in holding China accountable for anything. He is hardly known for his courage or principles. Plus, China gave Biden’s son 1 and ½ billion dollars to mage for them, generating tens of millions in profits for the Biden family. Hardly shocking that Biden doesn’t want to offend them.

To his credit, Dr. Fauci did make it clear he was never censored or silenced by the Trump Administration. Numerous news reports to the contrary, Trump never tried to quiet him.

The political party that controls Washington supports censorship and limitations on free speech; they support hateful, racist policies, such as those in Critical Race Theory; and they have allowed mainstream media and social media to cover-up stories that don’t benefit their politics.

Fortunately, in spite of widespread corruption, the full story sometimes still comes out. We now know with complete certainty that Fauci is a political creature who lies like a Clinton when it serves his purposes.

Don’t ever believe Washington makes decisions that are based on science and not politics. They are always political. Always. No exceptions. Write it down. And be careful out there.