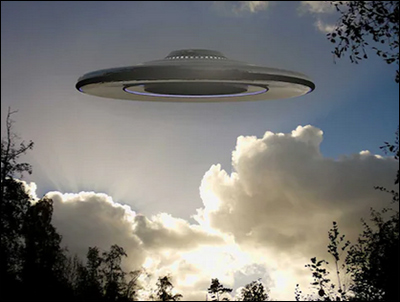 Sometime in late June or early July, the Pentagon is mandated to release a report on the astonishing subject of “Unidentified Aerial Phenomena (UAP),” which is the latest terminology for UFOs – “Unidentified Flying Objects.” The report is expected to be a compendium of declassified information on the topic. Will the report prove a bombshell or a bust? That all depends on how forthcoming Uncle Sam is. In a critical sense, the Pentagon, via recent declarations, has already dropped a bombshell. It acknowledges that UAPs are the real deal. Does a bigger bombshell await?
[DISPLAY_ULTIMATE_SOCIAL_ICONS]

UAPs have been much in the news over the last couple of years or so. To date, the unauthorized release of Navy video and some data have led the Pentagon to acknowledge that the now much-viewed footage of the “Tic Tac Incident” captures images of an object of unknown origin. The object appears to be under intelligent control.

An object, mind you, not as in weather balloons, drones, blimps, or conventional aircraft. Highly trained and capable Navy fighter pilots are eyewitnesses, having pursued the object in F/A-18 Super Hornets.

Navy commander David Fravor had this to say about the incident, which was a multiday event related to the U.S.S. Nimitz task force maneuvers that occurred a hundred miles or so off the California coast in November 2004. From The Sun, September 14, 2020:

Insisiting on the authenticity of what he [Fravor] saw on November 10, 2004 he said: “This is not like we saw it and it was gone or I saw lights in the sky and it’s gone – we watched this thing on a crystal clear day with four trained observers”.

CBS’ “60 Minutes” recently did a feature on the growing UAP issue. In an extra content segment for “60 Minutes Overtime,” reporter Bill Whitaker interviewed Fravor and Lt. Commander Alex Dietrich, both of whom were piloting the fighters that encountered the Tic Tac object (so-called because its shape resembled a Tic Tac breath mint). See the “Overtime” interview here.

Captured on the Navy’s advanced radar tracking, the Tic Tac clearly performed in ways that seemed to defy physics – or, at least, our current understanding of physics. The object had no visible means of propulsion, no exhaust, no wings, tail, or insignia. It was, at times, tracked flying at rapid speeds. Fighter jets can reach 1,200 miles per hour in very brief stints. The object was capable of remaining stationary, and then accelerating in an instant. It executed dramatic, abrupt maneuvers that would have stressed conventional aircraft to breakup. Its great speeds would exert G-forces that would crush humans.

Are UAPs being hyped by corporate media for ratings or whatever reasons? It’s important to note that Fox News’ Tucker Carlson has been on the UAP story for two years now. See this early report from Carlson in June 2019. Carlson has done many follow up segments, which can be found at YouTube.

Lue Elizondo was an intelligence officer with the Department of Defense. He says that he ran the Pentagon’s Advanced Aerospace Threat Identification Program (“AATIP”), euphemistically known as the “UFO Program,” for seven years (2010-17). Elizondo says that he whistle-blew about UAPs before resigning his position. He believed the subject needed public attention to pressure the feds to engage the matter in a more serious, focused way. He was interviewed in two segments by the New York Post’s Steven Greenstreet in his online program, “The Basement Office.” The segments can be watched here and here.

There’s increased concern that UAP pose a national security threat. Florida Senator Marco Rubio has been in the headlines recently calling for “serious analysis” of UAP.

Rubio, who as acting Senate Intelligence Committee chair, additionally asked for an unclassified copy of the [UAP] report to be released to Congress, and stated, “anything that enters an airspace that’s not supposed to be there is a threat.”

Per Newsmax, in Bill Whitaker’s 60 Minutes segment on UAP, ex-Navy Lt. Ryan Graves claims that “he and other members of his F/A-18 fighter squadron detected unexplained sightings of UAP in restricted airspace southeast of Virginia Beach ‘every day for at least a couple years,’ starting in 2014.” That’s a stunning revelation.

Rubio’s question is sensible. What are these objects, what are their origins, and what is their intent?

Modern UFO history may shed some light on the national security question.

UFO sightings and encounters are nothing new. During WWII, Allied and Axis airmen claimed to have seen mysterious objects – referred to by U.S. airmen as “foo fighters” – navigating in the skies over Europe and across the Pacific. The objects in some instances were referred to as “cigar-shaped” and performed in similar ways to the Nimitz’s Tic Tac.

Following WWII in the late 1940s, a “flying saucer” craze swept the country. What kicked off the craze was a sighting by Kenneth Arnold, a private pilot, who was flying his plane across Washington State on a clear day. The year was 1947. He claimed to have seen nine metallic “saucer-like disks” flying in formation near Mt. Rainer.

Then there was the famous – or is it infamous? – Roswell Incident. The claim is that a UFO crashed on a New Mexico ranch in 1947. The wreckage and bodies of the alien inhabitants were collected by the military, goes the story. The military – then and now – denies the allegation, stating officially that what crashed on the ranch was a high-altitude weather balloon. The Roswell Incident has lent itself to a lot of crackpottery and has been successfully commercialized by Roswell, New Mexico for decades.

The U.S. Air Force ran “Project Blue Book” from 1952 through 1969. This was the military’s highest profile formal investigation into the UFO phenomenon. When the project was terminated, the Air Force offered this summary:

As a result of these investigations and studies and experience gained from investigating UFO reports since 1948, the conclusions of Project BLUE BOOK are:(1) no UFO reported, investigated, and evaluated by the Air Force has ever given any indication of threat to our national security;(2) there has been no evidence submitted to or discovered by the Air Force that sightings categorized as “unidentified” represent technological developments or principles beyond the range of present-day scientific knowledge; and(3) there has been no evidence indicating that sightings categorized as “unidentified” are extraterrestrial vehicles. [italics added]

But despite Blue Book’s conclusion, numerous civilian, law enforcement, and military sightings and encounters have continued throughout the years.

A notable military occurrence was at the U.S. Air Force base at Rendlesham, England in December 1980. The sightings and encounter happened over a couple nights. The airbase housed nuclear weapons.

The Rendlesham Forest Incident, as it’s known, involved eyewitness – so-called “close encounter of a second kind” – engagement by U.S. Air Force personnel, led by the deputy base commander, Lt. Colonel Charles Halt. The object was encountered in the forest adjacent to the airbase. Given that the U.S. and the Soviet Union were at the height of the Cold War, this event at an American nuclear weapons facility was considered a national security issue. The incident is chronicled by Nick Pope, who ran Britain’s Ministry of Defence’s UFO Project in the early 1990s.

Perhaps the Project Blue Book conclusion was correct: UAPs pose no threat to national security. After three-quarters of a century of reported military sightings and encounters, there’s nothing in the public record to suggest hostilities or overt hostile intent.

Let’s close with the question asked earlier: “What are these objects, what are their origins, and what is their intent?” Are they extraterrestrial? Or are the objects something entirely different, which the Pentagon can more easily explain, something that isn’t at all otherworldly?