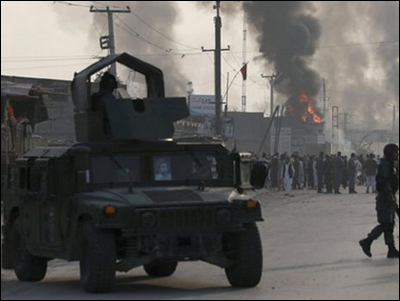 A premature U.S. pullout from Afghanistan will fulfill the late Osama bin Laden’s prophecy, which he based on America’s Vietnam experience, that the United States has no staying power and all the terrorists have to do is wait us out.

President Trump has the audacity to want to wind down the Afghanistan occupation. It’s an occupation, because almost 18 years later is it still a war?

The president has added insult to injury. How dare Trump want to meet with the Taliban. Talks with an enemy? Shameful. But then explain why the U.S. engaged the Soviets in dialogues for decades – or, later, the Chinese. Both were enemies of the U.S. Surely, both were devils incarnate.

Finding a peaceful resolution to the conflicts in an ancient and primitive land should be welcome by all. But the Wilsonian faction – or neoconservatives – aren’t happy. 9/11 unchained them in their quest for the U.S. to bestride the globe.

The U.S. has a mission, the Wilsonians contend. Not just defeat terrorists who aim to cause mayhem and injury in the homeland. But to transform nations. The term is “nation-build.”

Listening to the Wilsonians, the U.S. has a near religious obligation to civilize and democratize nations. Facts on the ground – the current state in Afghanistan and its history – just don’t matter. They’re willing to spend as much blood and treasure as necessary to accomplish the mission. That your grand-kids may still be bleeding and spending their treasure to do so is the price paid for the Wilsonians missionary zeal.

This from Jim Hanson, president, the Security Studies Group, via Fox News:

We have to be honest and admit that we cannot totally eliminate the Taliban, other Islamist groups and their influence in Afghanistan. So our best realistic option is to make a deal with the least bad elements and move on.

The Wilsonians pose a false choice. Either we keep occupying Afghanistan or we suffer in the war against Islamic terrorists.

But there are a range of options to battle Islamic terrorists in Afghanistan short of forever having troops stationed there. Jim Hanson points the way in his Fox News post:

The only thing that will prompt the Taliban to honor any agreement is fear of retribution if they do not. The advantage for us is we can bring that kind of pain in an asymmetric way rather than our current model of trying to control the situation on the ground. [Italics added]

The U.S. has an array of tactical options to battle terrorists in Afghanistan – whether or not they’re supported by the Taliban. An ongoing, large U.S. military footprint isn’t required.

On the eve of 9/11’s 18th anniversary, does the U.S. still face threats from Islamic terrorists? You bet. Does the nation have to take the fight to its enemies? Yes, it does. But does the U.S. need to be in Afghanistan – or elsewhere – open-endedly, making vain attempts to change peoples and cultures… this to serve some Utopian aim by Wilsonians that America create little Americas? No.

The Wilsonian conceit is the stuff that leads to folly. It’s high time to ashcan their approach.