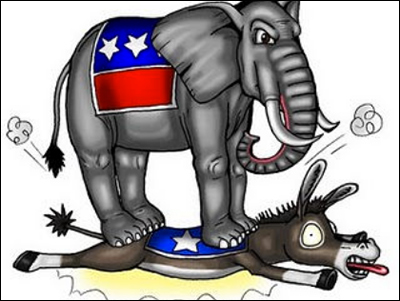 “It ain’t over until it’s over,” goes the cliché. Kentucky Democrat AG Andy Beshear may still beat incumbent Gov. Matt Bevin. The election is November 5. Until recently, though, many political handicappers considered Bevin a dead man walking. He was ranked by a collection of “high profile” polling firms as the least popular governor in the U.S.

As cited by the Louisville Courier Journal, a poll issued by Mason Dixon Strategy & Poll shows that Beshear and Bevin are tied. The survey was of registered and likely voters. An anti-impeachment backlash seems to be working in Bevin’s favor.

Bevin has made a concerted push to bring the possible impeachment of Trump into the campaign news cycles, and the Mason-Dixon poll shows evidence that most agree with the governor’s stance against such a move by Congress.

With 3.5 weeks remaining until Election Day, it’s anyone’s game in the Blue Grass State. That Bevin has made a comeback and might pull off an upset is telling. Disgust with the Democrats’ impeachment ploy might cost their party an important gubernatorial seat. 2021 begins critical redistricting of state legislative and U.S. House seats. Bevin retaining the governor’s mansion would be a serious setback to Democrats’ fortunes.

But Kentucky isn’t the only sign that Democrats are on track for an electoral shellacking next year.

The RNC’s fundraising haul in September is the highest amount [$27.3 million] for an “off-cycle month” ever raised by the GOP and Democrat National Committee (DNC), notes the news outlet. The RNC, which had $59.2 million in cash on hand last month, has nearly tripled the DNC fundraising in the current cycle, the political committee said. [Italics added]

More from the Breitbart article:

The report follows a joint announcement by President Trump’s 2020 re-election campaign and the RNC in which they said a whopping combined $125.7 million was raised in the third quarter of 2019.

Keep in mind that much of what Democrat presidential contestants are raising now is being spent to try to secure their party’s nomination. Whichever Democrat wins the nod will start at a financial disadvantage against Trump. The president enjoys the luxury of an uncontested nomination. His General Election campaign treasury will overflow with cash.

This lastly from Democrat political consultant Michael Starr Hopkins, who wrote for The Hill, October 16, 2019:

A lack of enthusiasm or support around one candidate risks dividing the party and depressing turnout, which is what happened to Clinton in 2016. A left versus center battle will exacerbate the factions that never truly coalesced around Clinton, leading to tepid support from the type of voters who were the foundation for Barack Obama.

Democrats risk an internal split and depressed voter turnout because that’s what a lackluster, out-of-touch nominee does. Democrat “centrists” are mere degrees right of their hard-left compatriots.
They’re more practical and less ideologically rigid. With Joe Biden fading fast, the likelihood of an avowed socialist or socialist sympathizer atop the ticket grows. That looks increasingly like Elizabeth Warren.