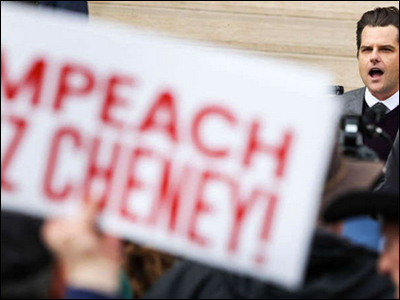 It brings them even more joy if they blame Trump for specific atrocities. A home run for them is when RINOs place blame on Trump for the “deadly” actions on January 6. Such accusations are uninformed, politically bigoted, or both. Blaming acts of violence on the politicians the criminals support is almost never reasonable and represents lazy and misleading thinking.
[DISPLAY_ULTIMATE_SOCIAL_ICONS]

It would be possible to say there is a link between conservatives, Republicans, and those who question whether the election was fair, on the one hand, and those who protested January 6th on the other. But that doesn’t prove one caused the other.

By the same token, there is a link – a base of support and common beliefs – between the Democratic Party and the hundreds of leftist riots in 2020 that caused dozens of deaths.

But in neither case do the leaders deserve to be blamed for the actions of rioters. Our leaders on all sides need to be able to advocate positions, engage in debate, and criticize opponents without being accused of stoking an insurrection, unless that is what they specifically do. Trump did not.

It is legal and appropriate for leaders to say their supporters need to fight for their beliefs and take their concerns to their elected officials. It is not acceptable, or legal, for them to say, “You need to take a gun to the State House this morning and take the governor hostage.”

A Bernie Sanders supporter shot Steve Scalise and other members of Congress several years ago. The assailant shares the philosophy and positions of Sanders. That does not, in any serious or logical way, make Sanders responsible for the attack.

Nor does Trump’s rhetoric make him responsible for the Capitol events. Trump never advocated violence, specifically called for peaceful protests, and not one Trump supporter killed anyone January 6. None. Zero, zip, nada.

The only person killed at the Capitol that day was an unarmed female U. S. veteran who was shot in the face by a police officer. It says something about America today that no one is outraged, calling for investigations, or advocating prosecuting the officer who killed her. Yet when an unarmed black person is killed resisting arrest or committing a crime, it leads to buildings being burned, businesses looted, and law enforcement being vilified.

January 6, four others died of natural causes or a drug overdose, including the police officer who had a stroke. The assault was a terrible, indefensible event. But Trump supporters did not kill people.

All deaths are bad, of course, but the talk of a deadly assault is intended to mislead people into thinking a bunch of Trump supporters stormed the Capitol and killed people. That. Didn’t. Happen.

It begs the question so often relevant to things Trump; if he is so evil, so abhorrent, why do people have to lie to vilify him? If the truth is bad, why don’t his enemies stick to it?

Liz Cheney has gotten a lot of attention because she blames Trump for January 6 and infers it is all a matter of insurrection, sedition, and treason. That is a huge overstatement and generalization intended to not just harm Trump but to trash the Republican Party, which supports him, and their supporters.

Cheney is part and parcel of the Bush/Cheney wing of the Party – duh – and there is no shortage of reasons for her to resent Donald Trump. Trump did what Jeb could not – he got elected president – and no one can doubt Trump’s criticism of low-energy Jeb was effective.

She has a chip on her shoulder. Unfortunately, being number three in the House GOP leadership requires one to serve the nation and their counterparts in the GOP caucus, not settle old scores and cling to grudges like a rabid badger on a Wyoming ranch.

Cheney has not just expressed reasonable differences of opinion with Trump. She has vilified him, accused him of seditious conduct, and blamed him for actual deaths. Her growing unpopularity in the GOP is not because she has differences of opinion with Trump. It is because she has gone out of her way to express her hatred of him, to damage the GOP, and to show her disdain for both the GOP base and her colleagues in the process.

Anti-Trumpers, leftists, and the media (but, again, I repeat myself) love RINOs who go out of their way to criticize the man their party overwhelmingly preferred as president. Romney gets lots of attention because he was the presidential nominee in 2012, and Cheney is a focus for both her leadership position and genetics.

Kurt Schlichter has done a marvelous job of clarifying why Cheney ought to go, and is unapologetic for it. See here.

It is entirely possible to not like Trump’s tweets, childish spats, crudity, and general boorishness, and yet admire his overall record as president, a conservative, and leader of the free world. Any genuine conservative would prefer to have Trump as president than Joe “I Was Elected What?” Biden or Kamala “Has Willie Called Today?” Harris.

Elections, we are reminded, do not offer us a choice between perfect alternatives. At best, they offer us at least one candidate we find generally preferable to the other.

When a Liz Cheney goes out of her way to overstate the evilness of Trump, to suck up to Biden, to create discord within the ranks of the House GOP, and to insult the 75 million Americans who voted for Trump, she deserves what she gets.

Cheney’s actions do nothing to promote effective, constructive, conservative strategies. If her goal was to undermine her party, insult the base, and make it harder for the GOP to coalesce around a candidate in 2024 or a slate of them in 2022, she could hardly have done worse.

If Cheney or Romney were to leave the GOP and join the Dems, it would improve the overall intellect and effectiveness of both groups.

Cheney represents a segment of the party that adores the political elite, people with names like Clinton and Bush and Cheney. Many, like George W., think fighting for one’s principles is beneath them, unsavory, ungentlemanly. Anti-Trumpers generally feel more comfortable with elitists than with an often crude but effective streetfighter like Donald Trump.

If she is ousted from the ranks this week, good riddance.